Over the years, SFMOMA has endeavored to make itself increasingly accessible and visitor-centered, in both its physical and digital spaces. In 1995, SFMOMA was one of the first art museums to have a presence on the web, and as recently as last year we were able to demonstrate a deep desire for access to art among Americans as we responded to millions of text messages asking to view our collection. In 2017, SFMOMA’s Chief Content Officer Chad Coerver published, “On Digital Content Strategy,” which discusses how the public’s engagement with SFMOMA’s digital content is fundamentally indistinguishable from the public’s engagement with its physical spaces.

Net neutrality has been critical to ensuring equal public access to web content, including cultural and artistic content. On June 11, 2018, the FCC’s repeal of net neutrality went into effect and may jeopardize that level of open and unfettered public access. The ACLU defines net neutrality as “your right to access what you want and how you want it on the Internet.” Internet service providers will now be able to limit how Americans access the World Wide Web. It’s too early to know how ISPs will react or what impact it may have, but we can look to countries with an absence of net neutrality for clues. In some countries where there is no net neutrality people are offered access to the internet much like a cable subscription–there’s a social media bundle, a music bundle, an email bundle and so on. Not only could this limit diversity of perspectives and digital culture users of the web can access, it is contrary to the very foundation of the web.

Solana Larsen, editor of the Internet Health Report at Mozilla.org, provides a helpful summary, “It’s called the World Wide Web for a reason. Anyone who wants to slice up the internet into categories like ‘social’, ‘music’, ‘movies’ and have people pay for special access to that, as we’ve seen in many countries, is applying a kind of channel-based mentality to something that truly defies traditional categories, on purpose.”

The web today is widely regarded as an engine of commerce, but its origins were born in 1991 from a scientist’s desire to facilitate open collaboration among researchers. The web is meant to be contributed to, as much as it is meant to be consumed. When looked at through the lens of collaboration rather than commerce, providing equitable access to content and media seems a natural, logical way to further public knowledge and understanding. It’s also a popular approach. According to Mozilla, over 75% of Americans want net neutrality.

It is this collaborative vision of the web that we at SFMOMA seek to emulate in our digital initiatives. Whether it’s how we approach design, serve our website or conduct investigations into the burgeoning world of mixed reality, there are always choices to make that favor increased and unimpeded public access to the Museum’s educational, artistic, and cultural content.

SFMOMA has a long tradition of open collaboration and access in our physical and digital spaces. SFMOMA On The Go involved collaborations with many other organizations to bring traveling exhibitions, outdoor and site-specific installations, and education initiatives to communities throughout the Bay Area. The Artist Initiative brings curators, conservators, art historians, and artists together to pilot new approaches to contemporary art conservation, interpretation, and display. Public Knowledge, our partnership with the San Francisco Public Library, brings together a diverse cross-section of the community to strengthen the fabric of civic life. The work we do at SFMOMA is meant to build upon both physical and digital communities, and an open, accessible internet is at the heart of that.

Intrinsic to SFMOMA’s core mission is making art “a vital and meaningful part of public life”. To that end, SFMOMA strongly supports net neutrality and its corresponding access to cultural and educational initiatives. Here’s to many more decades of open collaboration.

More about net neutrality can be found at The Wired Guide To Net Neutrality.

read
All Good Things Must Come to an End: The sunset of SEND ME SFMOMA

read
Combing through the Collection: Showcasing the Unexpected in the Art of California Galleries 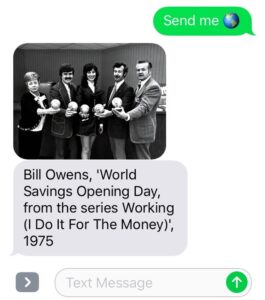 read
Send Me SFMOMA
See All