What’s It Like Soaring Down McLaren Park in a Derby Car? Well… 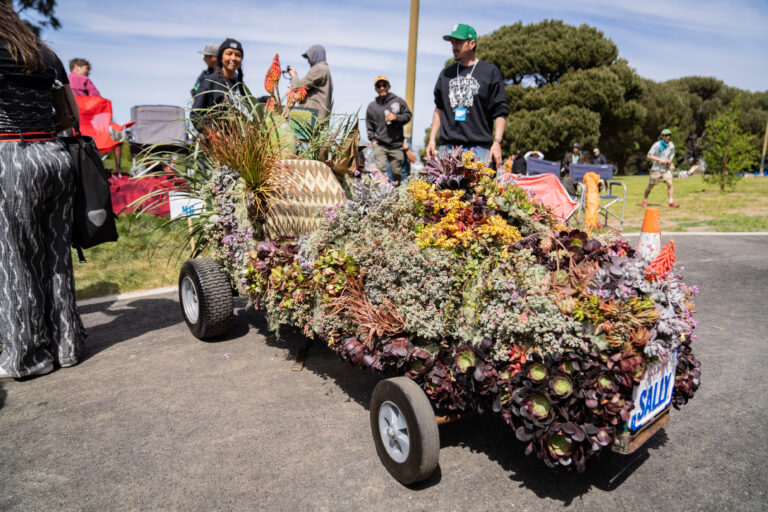 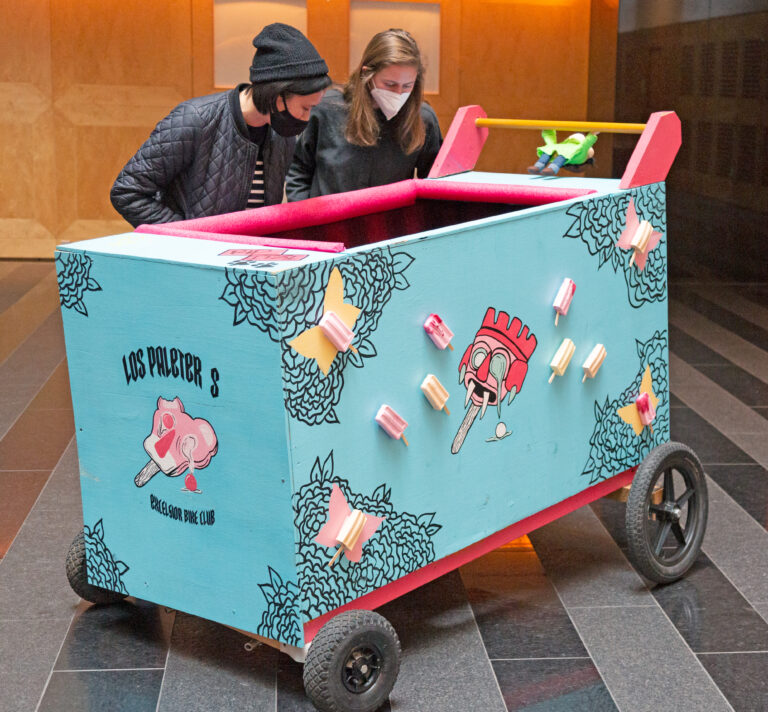 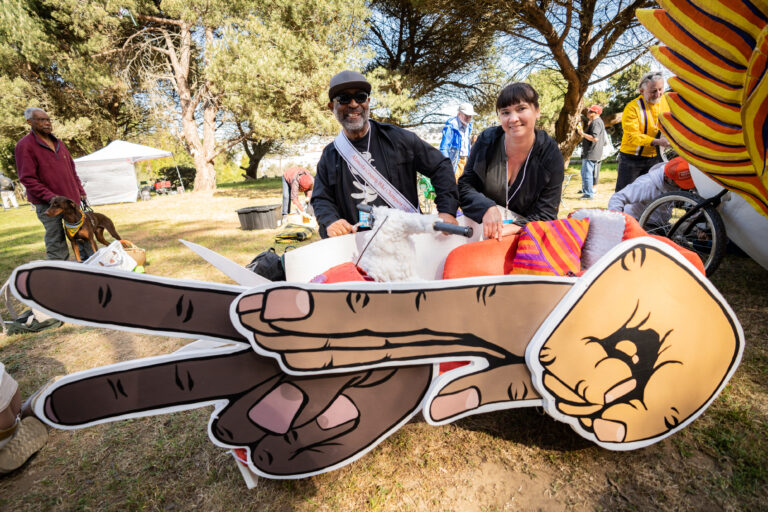 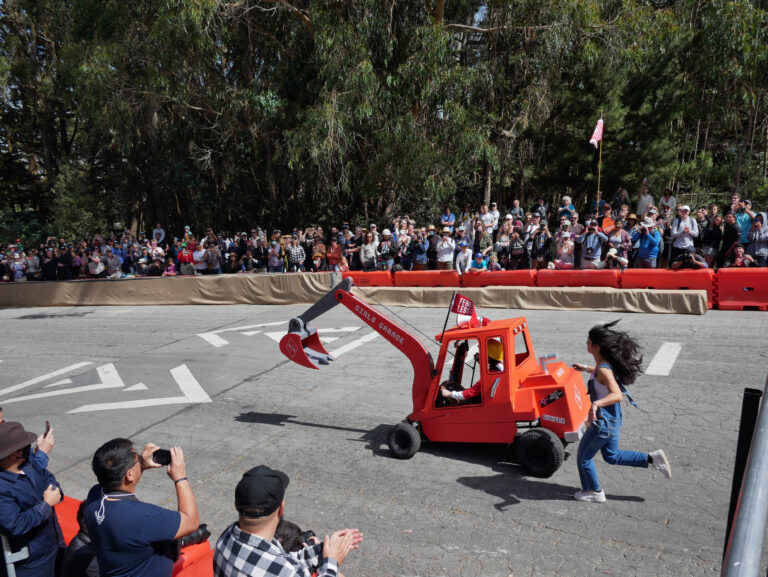 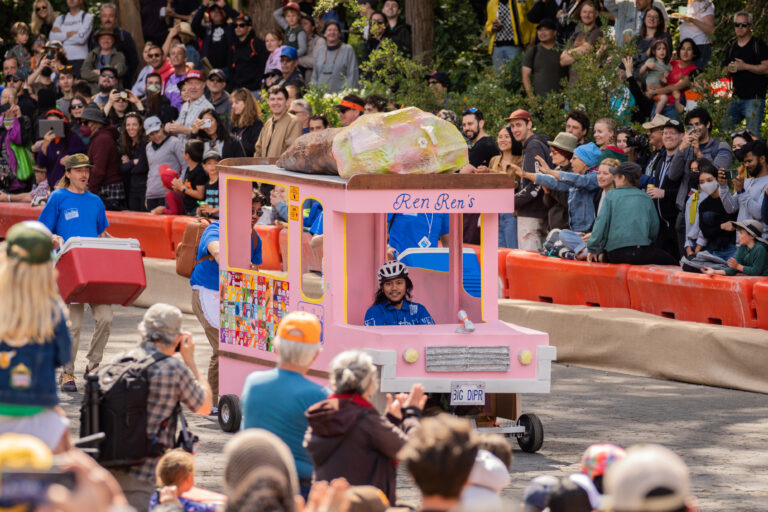 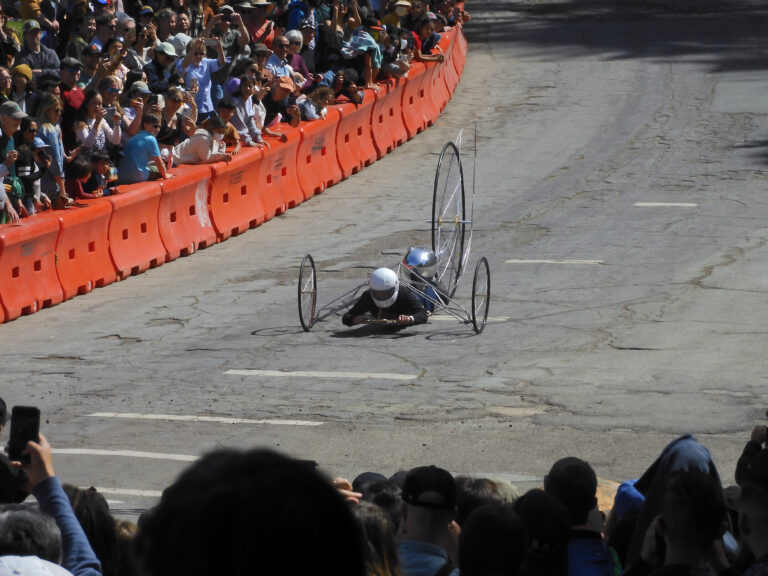 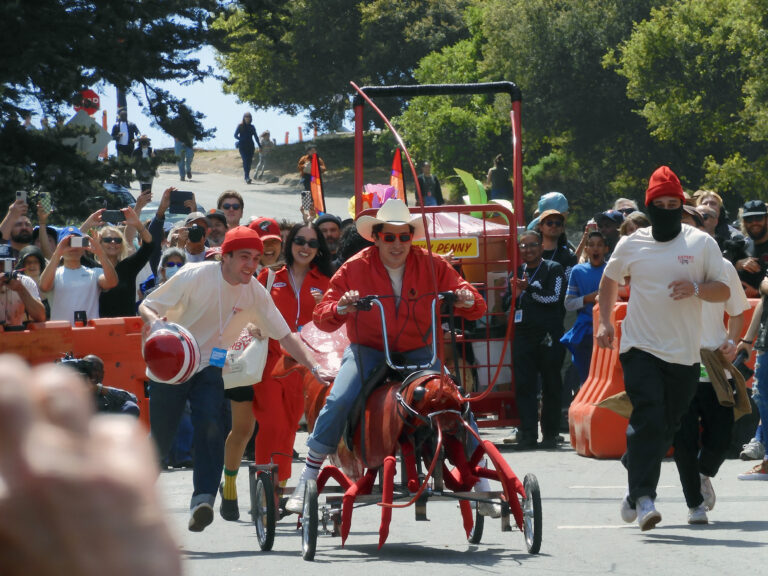 Will April 10, 2022, go down in art history? It’s not every day — or even every decade — that cars that resemble shrimp, succulents, excavators, and ice cream trucks soar down San Francisco’s Shelley Drive. SFMOMA’s Soapbox Derby was an explosion of Bay Area creativity, with artist-designed cars and trophies drawing approximately 8,000 people to McLaren Park to watch the riveting race. Adding to the fun, the derby’s challenging course featured a speed bump, multiple bends, and a notorious “cheese grater” portion of the track where potholes kept derby participants on the edge of their seats. Eight artists shared what it was like driving their colorful cars at the derby, including the mishaps and mayhem they encountered along the way.

Succulent Sally took a little bit of a wiggle on the first bend before the driver, Patrick Sim, regained control. Then, at the last turn, Sim hit a pothole; one of Succulent Sally’s wheels fell off, and the car crashed into the barrier dividing the racetrack from the crowd.

“She’s still alive,” said Liz Hui, a multimedia artist and gardener for the San Francisco Recreation and Parks Department and the team lead for Succulent Sally. Hui means that literally — Succulent Sally was made entirely of plants and hardware found and salvaged by gardeners at McLaren Park, right down to the wheels and plywood. All the materials from Succulent Sally will be replanted and reused; the car fittingly won the derby’s award for “most natural” and a trophy designed by Ryan Whelan.

Los Paleteros had a bad spill coming down Shelley Drive — so bad that its driver, Erasmo Martinez, leapt out of the vehicle. A schoolteacher by day and stunt car driver by night, Martinez has returned to the Excelsior Bike Club after a brief hiatus. So, why did Los Paleteros crash?

“The braking system wasn’t the best,” explained Oscar Grande of the Los Paleteros team. “We had an old school pull up lever braking system, so the car started to get super unstable on the gravelly part of the course. The car was flip flopping, going on its right wheels, left wheels. Then the wheel popped off, broke, bam, with the impact and basically flipped over. Good thing Ras was able to jump out of the car — he’s a total trooper, and now he has a lot of street credibility with his students.”

Shortly after his fall, Martinez waved his hands in the air before the cheering crowd, earning the Los Paleteros team the designation “most graceful wipeout,” along with the accompanying trophy designed by Matt Goldberg.

Roshambo fell apart right at the finish line, receiving an animated reaction from the audience because the timing was so convenient. The car’s wooden cut-outs of a rock, paper, scissors, and hands doing the three motions for roshambo all collapsed. So did the “get crafty” sign referencing the DIY crafts and sewing work at Oakland-based nonprofit Rock Paper Scissors Collective (RPS). The only element of Roshambo that remained intact was a license plate reading, “Arajo forever,” a memorial to the 29-year-old visual artist and former RPS member Ara Jo who passed away in the 2016 Ghost Ship warehouse fire.

“We try to bring her into everything we do,” said Kristi Holohan, a RPS board member who designed and built Roshambo’s car with Lionel McNeely. “Ara Jo would have freaking loved this event. She probably would have driven and worn the wildest outfit in the world, made of pleather.”

Close Calls and Near Misses

Thirteen students and two instructors from Girls Garage, the first-ever building and design workshop for female-identifying youth in the United States, collaborated on Red Rita, the Feminist Excavator, which won the award “most joyful.” The car included a stuffed uterus, a Rosie the Riveter sculpture, feminist bumper stickers, and googly eye headlights. Regrettably, Sitney noted, the excavator’s giant claw couldn’t be filled with “male tears” because of the derby’s rule about not spilling liquids on the track.

Come race day, the only hiccup was that Sitney couldn’t pull the excavator’s arm, steer the car, and activate the smoke machine at the same time. “We had one of our girls in our cohort named Hunter run as fast as she possibly could with the remote activator to keep the smoke coming out of the exhaust,” said Sitney.

“I was like, ‘Oh my God, did I just screw it up for the entire race during unloading?’” said Del Rosario.

Fortunately, those fears didn’t come to fruition. Thousands of onlookers watched as The Big Dipper drove smoothly over the speed bump, catching glimpses of its forty-five invented ice cream flavors such as Joan Brownies, Rothko Pops, and Asawa Swirl. The ice creams were all tangible ceramic objects sold to the public before and after the race, and during the race, Del Rosario and his team tossed It’s-Its to the crowd.

Derby alumnus Ron Covell built cars for SFMOMA’s 1975 and 1978 Artists’ Soapbox Derbies, then returned this year for another round of revelry. His 2022 car Ron’s Racer was a revised version of his 1978 entry, with an enlarged opening, rebuilt wheels, and a polished aluminum unit for added sparkle.

“It was a scary ride,” said Covell. “I rode the brakes all the way down the hill. Looking at the video footage that other people shot, it looks like I’m moving at a snail’s pace, but for me suspended in the car with my nose six inches off the ground, it was faster than I wanted to be going.”

Combining a gigantic shrimp car and a bunch of excited little kids can have unintentionally destructive results. That’s exactly what happened to artists Andrew Sungtaek Ingersoll and Oliver Hawk Holden, who created a ten-foot shrimp car as an inside joke from the time the duo became involved in the shrimp breeding business. With the artists’ permission, kids climbed on Shrimp Car before the race, inadvertently pulling on the brake cables and de-tensioning them in the process. When Holden mounted the car’s saddle, dressed as a cowboy, he noticed the brakes were nowhere near as strong as they should have been.

“I was holding the brakes pretty much the whole time and it wasn’t really doing anything,” Holden said. “I was pretty terrified, but I still had a good time riding down the hill.”

Learn more about the Soapbox Derby

The 2022 Soapbox Derby at McLaren Park

Learn more about the Soapbox Derby, then and now! 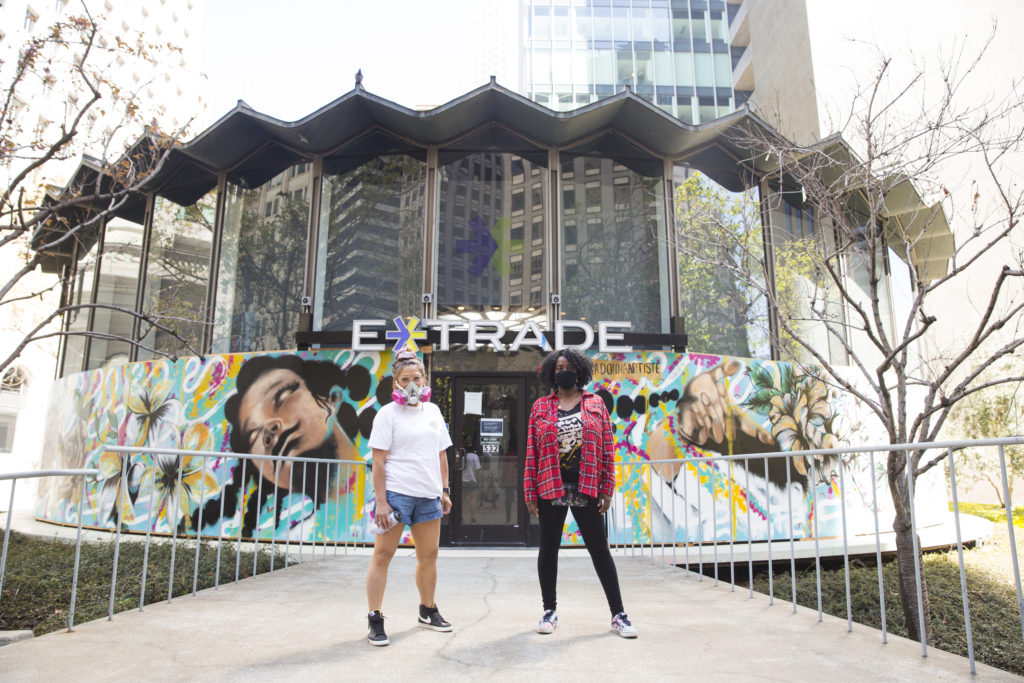 Read an essay about the artists who participated in 2022’s Soapbox Derby. 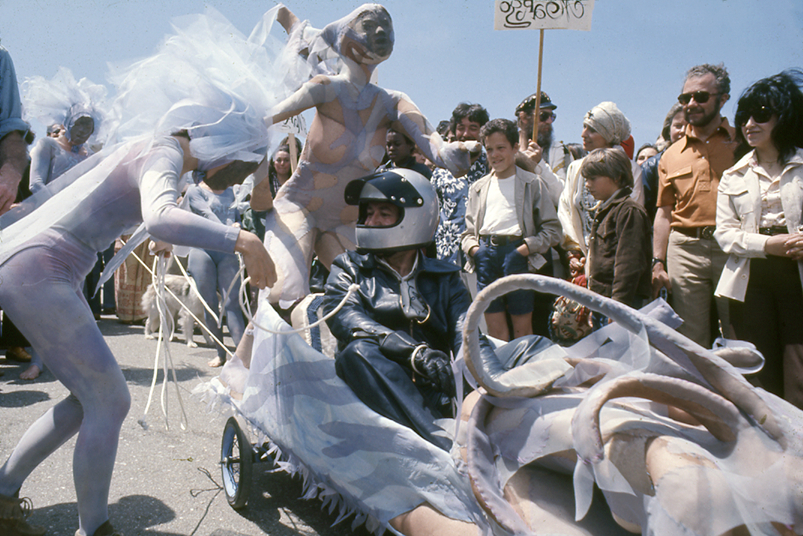 Then + Now: The Trophies of Soapbox Derby

Learn about the “making of” for trophies of the Soapbox Derby.