RSVP to the Soapbox Derby

In the 1977 documentary The Incredible San Francisco Artists’ Soapbox Derby, artist Lynn Hershman Leeson observes, “I think that museums in the future are going to be moving more and more outside; they won’t have limitations.” Participating artists for the 2022 revival event expressed a similar sentiment⁠ — that a museum should be out in the community rather than inside the walls of the institution. As the artists stare down the hill at McLaren Park, a few have grown existential about the function of art and the role museums play in bringing it to the public.

In the long phase between artist commission and the ride down on April 10, ideation, fabrication, and creation must take place. Each artist is looking at that process from their own direction as the derby shapes up.

Emily Pilloton-Lam of Girls Garage is focused first and foremost on what it meant to her and her teen program participants to be part of such a large-scale event. “When the museum asked us, we responded forty-five seconds later with an enthusiastic yes,” Pilloton-Lam says. “Any affiliation or collaboration with SFMOMA is a validation for us, and for our students’ work and their identities.”

Girls Garage is building a derby racer as a project with their free youth program, which involves girls and nonbinary children in projects that teach both art and trade. Pilloton-Lam co-teaches the program with Augusta Sitney, a certified welder. Together they came to a concept on their car and looked at it as an opportunity to teach participants about physics, construction, art, and the specific problems of an object in motion. 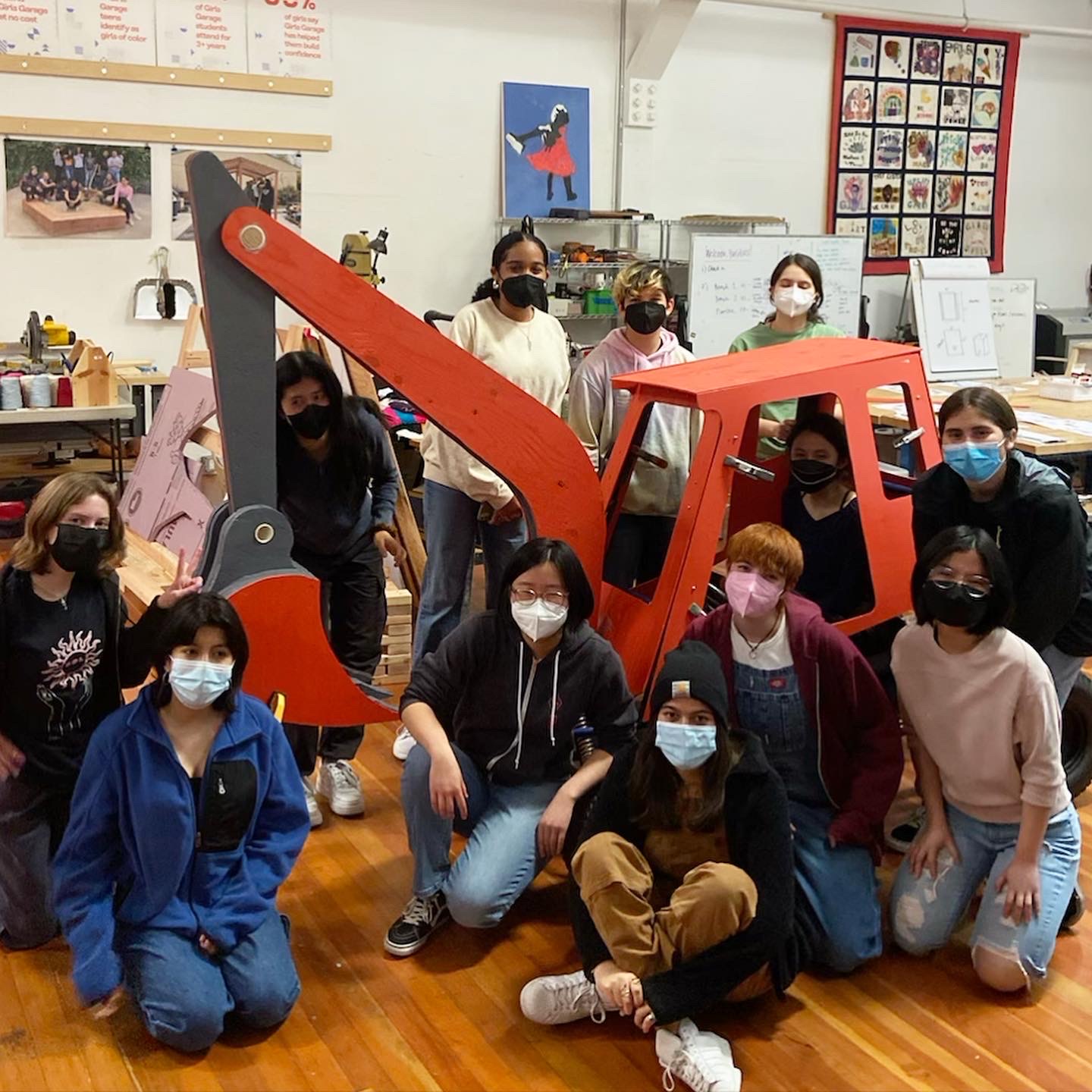 “Big machinery is typically associated with men and masculinity, but we wanted to challenge that. We thought about the iconic imagery for women at work, so we chose an excavator, with the big claw for moving earth, for manipulating the environs,” Pilloton-Lam says. “We are modifying a go-kart frame we got second-hand online. We’ve learned a lot about car parts, and the process of building it has been super fun. Every week we get together to divide and conquer; welding and modifying the metal of the frame, then sheathing it in wood.”

“We’re both tradeswomen, but the most fun has been thinking about amenities and accessories,” Pilloton-Lam says. “ We’re setting a bobblehead ornament shaped like Rosie the Riveter, talking about foggy mist blowing out of the exhaust pipe. There has also been intense debate about a feminist vanity plate. We’re not taking it too seriously. ”

She’s optimistic about the experience and its larger meaning for Girls Garage. “When an institution like SFMOMA comes to us and tells us that they believe we belong in the room, or on the track, that’s huge. When the kids heard that this derby was an SFMOMA event, they wanted to put this on their resumes. We all kept wondering: are we gonna be good enough? But this project reminds me that that isn’t the right question. Even if we don’t win any awards, this work of moving art has got every kid in it. Their stories, their ideas. The question is: are we representing ourselves?”

The question of representation is also important to Le Bohemian Muse, one half of creative duo Bella Donna Artiste in San Francisco. “Our work explores feminine energy, and we do that through our two artistic styles,” they says. “Addendum 24 does classical portraiture and I’m an abstractionist. We’ve been thinking about including a goddess image in our vehicle, as kind of a statement. But this project is really an artistic challenge. Artists can get very stuck on what we always do. The derby gives us an opportunity to expand and push further.” 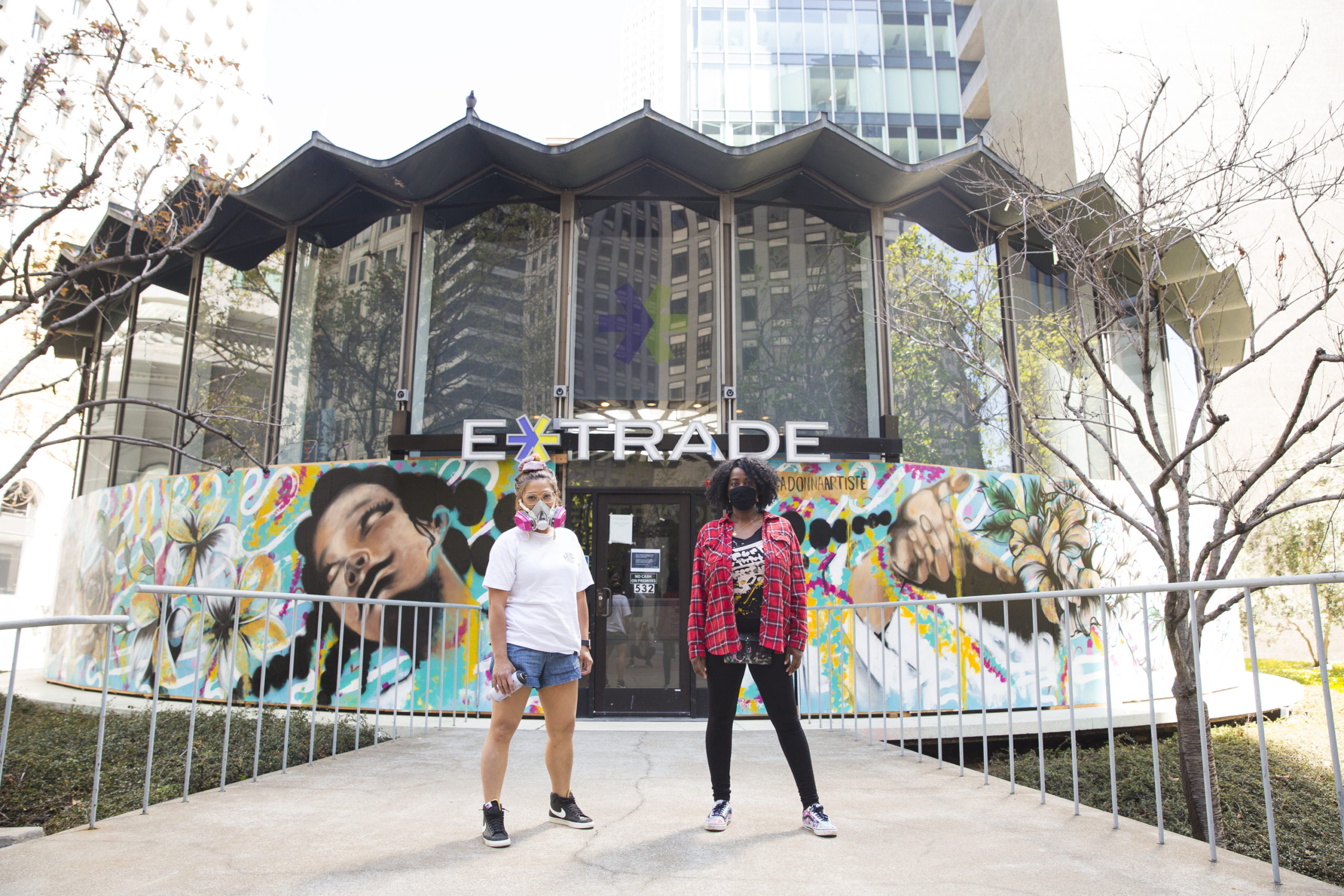 Many artists are coming at this project from the opposite of Girls Garage; accustomed to art work but not necessarily fabrication, they are challenged by the construction of the object itself. “I’ve never built a soapbox racer,” Le says. “How do we even do this? While we’re trying to make a statement and express our style, we also have to think about going down a hill and not falling apart. We watched the prototype test and some of the historical record, and realized we were thinking about it like a race, but it’s more like a parade.”

“Discovering new artists is a big part of the derby, for fellow artists as much as for the people who come to see it,” Le says. “We are discovering community through this.” 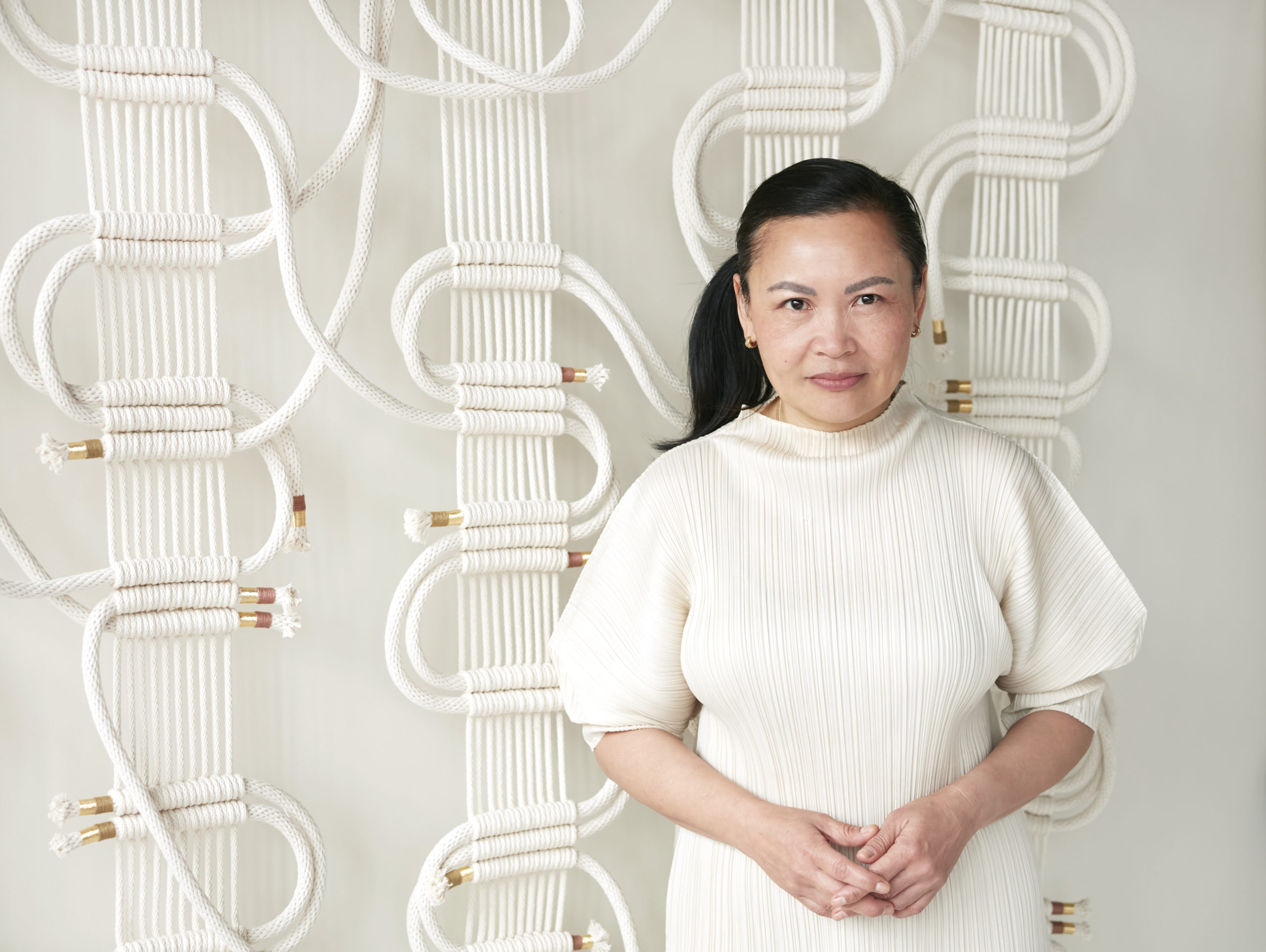 For Windy Chien, the Bay Area racing community is familiar, but the derby will be a whole new experience for the longtime fiber artist. “Having lived here since 1989, I really remember the punkers and skaters on Bernal and Potrero, just rocketing down the hill,” she says. “They intimidated me, but they were having a blast.”

Speaking from her studio, surrounded by the red and white intricate knotwork that makes up her art, Chien immediately brought up the artist Ruth Asawa, who created a trophy for the derby of 1975, long before the name “Ruth Asawa” appeared on a public school or on a U.S. postage stamp. “Seeing that Asawa was a participant back in the day made this an instant yes,” she says. “As an Asian-American woman and a fiber artist, she is of course a huge figure to me.” Chien views the derby as “an opportunity to speak with the language of knots.”

That may seem like a far cry from the creation of a derby racer, but Chien was unshakeable. Looking at the possibility of constructing a car, Chien knew precisely what she wanted. “For me, it’s getting to create a whole, enclosed environment like a cocoon inside the vehicle as an aestheticized space.”

She called in Marcus Guillard of One Hat One Hand, an interdisciplinary design studio in San Francisco. “The unsung heroes of the art community are fabricators and art handlers,” says Chien. “Art handlers have so much knowledge, and I respect how they know their shit. Fiber art is in both the worlds of fine art and craft, so I’ve learned a lot about how the world views both. There’s an assumed hierarchy placing art above craft. Craft has a profound understanding and respect for the materials, and that informs the art.”

“Fine art galleries and institutions need a kick in the ass,” she added. “SFMOMA is kicking itself in the ass by reaching the community with events like this. They’re doing art in a context where we don’t normally see or expect art, and it’s very exciting. Fine arts is not my playground, but something like this really can be, even if I have to drive with the brakes on the whole time.”

Community can be discovered anywhere. And when the art world comes barreling down a steep hill in a local neighborhood, art can also be discovered everywhere. As artists look down at their possibilities from the top of the hill, we look up and await them, to discover what they’ve made, in an open environment with unlimited potential.

Get art, in your inbox. Not too often.

Learn about all of the artists racing in the 2022 Soapbox Derby. 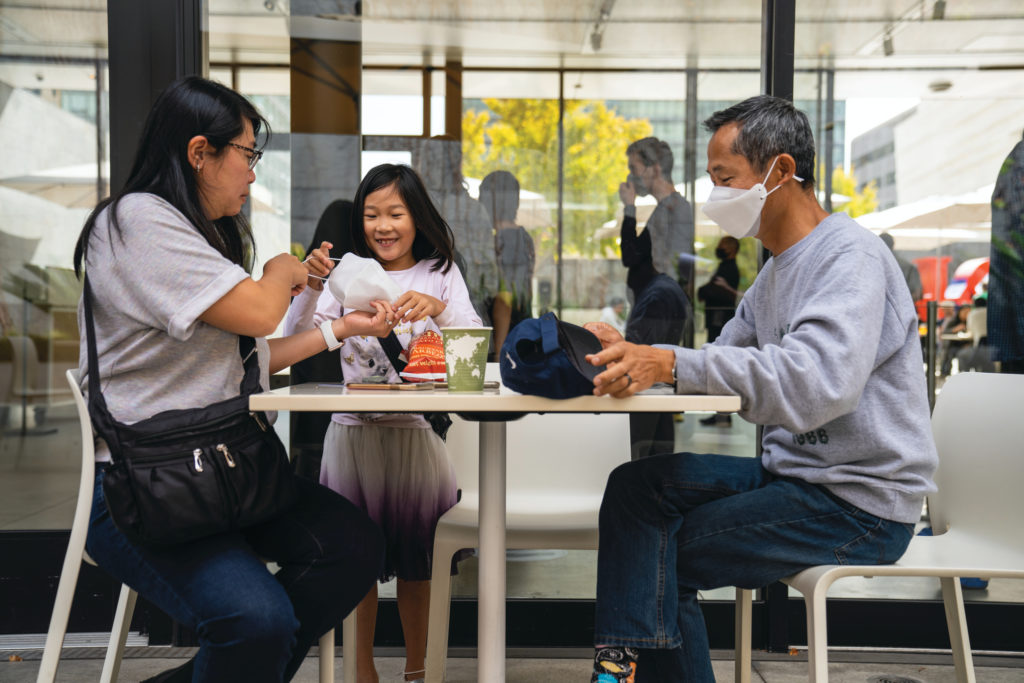 The Families Hub from Education

Guests 18 and younger are always free. Plan a trip or download free activities. 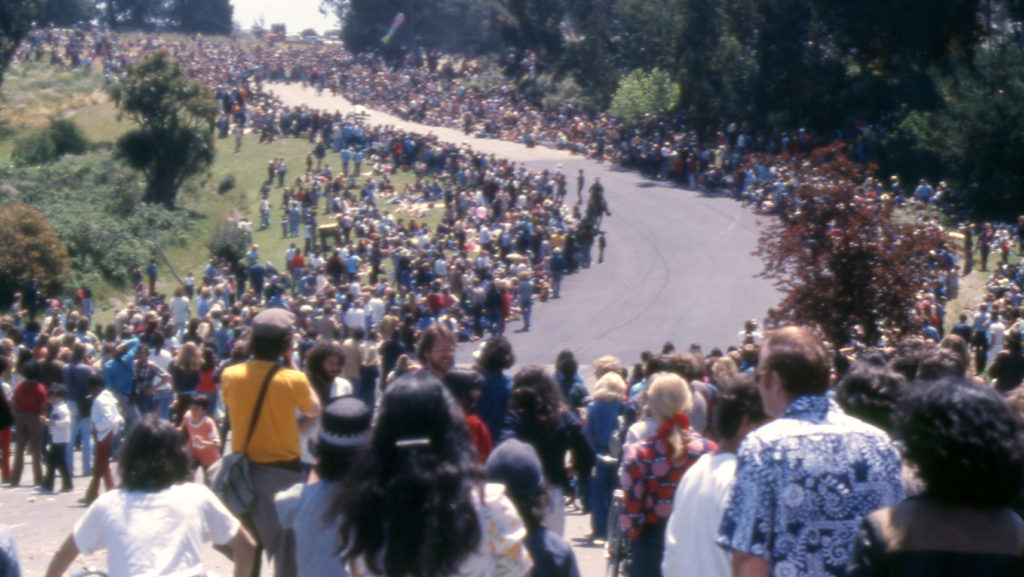 Tomoko Kanamitsu on all the reasons to revive the Soapbox Derby.

Meg Elison is a bicoastal author of six books of fiction and a freelance journalist. Her work has appeared in Slate, Bustle, 7x7, the Fair Observer, the Daily Californian, and the San Francisco Chronicle. She is a graduate of UC Berkeley and a high school dropout. Fifty Years of Free Speech: Perspectives on the Movement that Revolutionized Berkeley is a collaborative historical project Elison helped write, and is available wherever books are sold. Twitter: @megelison