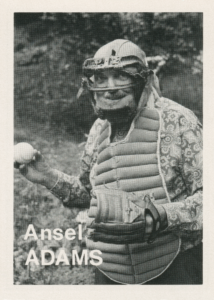 All kinds of artists collect things to feed their creative practices (see for instance the collections of Fred Wilson, Petah Coyne, Josh Faught, and others featured in the SFMOMA video “Art Is . . . Collecting,” or our video and story on Mike Mandel’s Baseball-Photographer Trading Cards [1975]). But Walker Evans was consumed with collecting. By many accounts at the end of his life, if you ever saw him outdoors he was almost certainly hunched over, peering around for cast-off stuff to take home. 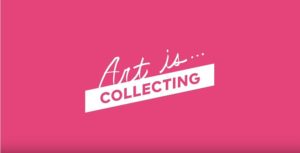 “Evans started collecting early,” explains Clément Chéroux, SFMOMA senior curator of photography and organizer of the current exhibition Walker Evans, which prominently features selections from the artist’s many collections. “The postcard collecting began when he was a teenager, and it was a great passion straight through until he died in 1975. He lectured on postcards at Yale University and at New York’s Museum of Modern Art, and he published three articles on them: two in Fortune and one in Architectural Forum.”

Evans likewise found endless appeal in graphics on tin or wood or paper, expressing designs either complex — like elaborate movie posters — or elementary — like a bus ticket, a playing card, or a sign advertising a garage. He was particularly interested in what Chéroux calls “both typography and typos” (so many signs in his collection contain spelling mistakes, we can be confident that’s why he liked them): “He aspired, as a young person, to be a ‘letterer’ when he grew up.”

But Evans wasn’t a hoarder; he was more a researcher, and in love with the art of display. Photographs of the interior of his house in Old Lyme, Connecticut, show thoughtful arrangements of his acquired signs on the walls — certainly inspired by having seen so many displays like the one pictured in Roadside Stand near Birmingham (1936). “Here we have a picture showing his studio just after he died,” says Chéroux, pointing to a page in the exhibition catalogue, “and if you look carefully you’ll see his note to the housekeeper saying, ‘Please do not disturb the arrangement of the tin beer caps in this washbowl.’”

Another project for Evans was photographing tools that he collected — specifically setting up comparisons between American and European tools, contrasting the former’s more straightforward designs with the latter’s more ornamental designs. “The tools for him had a kind of beauty, a certain aesthetic,” notes Chéroux. “In the photographs they’re like sculptures (and he did also photograph sculptures). He once described a hardware store as a ‘kind of offbeat museum show.’” But in the photographs, he was also investigating how a tool’s utility determines its shape to a greater or lesser degree, in a way that is culturally specific to the maker. “For him, American tool design perfectly expressed American vernacular culture.” 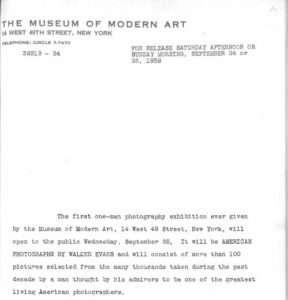 The question of the “vernacular” — meaning utilitarian, local, and popular — was very prominent in Evans’s day. It’s not just a convenient word that we use now, retrospectively, to describe his output, but rather a concept that was widely discussed in the 1930s and 1940s. Not coincidentally, these were key decades in Evans’s career when he established himself as one of the most important photographers in the United States, making pictures of rural America for the Farm Security Administration from 1935 to 1937. In 1938, immediately following this extremely productive period, the Museum of Modern Art in New York featured him in a solo exhibition — the first ever to feature a photographer.

“America was coming into its own culturally then, especially with the influx of European artists fleeing fascism,” Chéroux explains, “and there were intense debates going on among critics and theorists, especially at MoMA and Harvard University, who were keen to show that America had its own specific art and culture. They wanted to prove that modernism had roots not only in Europe but also in the United States. Excavating American vernacular culture was a way to show that modernism, or a modern spirit, also existed here. And the general consensus was that American modernism was built through the vernacular. Thus there was much discussion about what the American vernacular should and did mean.”

Tellingly, Evans organized his postcard collections into categories such as “American Architecture,” “Factories,” “Automobiles,” “Street Scenes,” “Summer Hotels,” “Lighthouses,” “Outdoor Pleasures,” “Madness,” and “Curiosities.” He once wrote of the impact of the postcard, “The very essence of quotidian US city life got itself recorded, quite inadvertently, on the picture postcard of fifty years ago. . . . The picture postcard is folk document.”

For Evans, photographing was a way to continue collecting. Chéroux strongly suspects that photography became for him a convenient way to acquire things too big, too unwieldy, or too complex to physically remove from American roadsides to bring back to his home or studio: “For instance look at Garage in Southern City Outskirts, Atlanta, Georgia (1936), one of his most famous photographs, showing the front of a garage near Atlanta. The owner wanted to show on the facade what he was selling inside the shop. But instead of just announcing in text on the exterior, ‘We are selling car parts,’ he mounted all sorts of merchandise on the building itself. And there’s more going on than just that. All the tires and wheels on the outside of the store make a kind of visual rhythm. A graphical rhythm. It’s aesthetic. Evans must have wished he could remove the whole thing and take it home.”

Instead, he photographed the ordinary and the idiosyncratic, and put it on display at MoMA and elsewhere so that the (art) world would take notice. “For Evans,” Chéroux concludes, “these signs, postcards, and graphic ephemera were very seriously holding the spirit of America.”