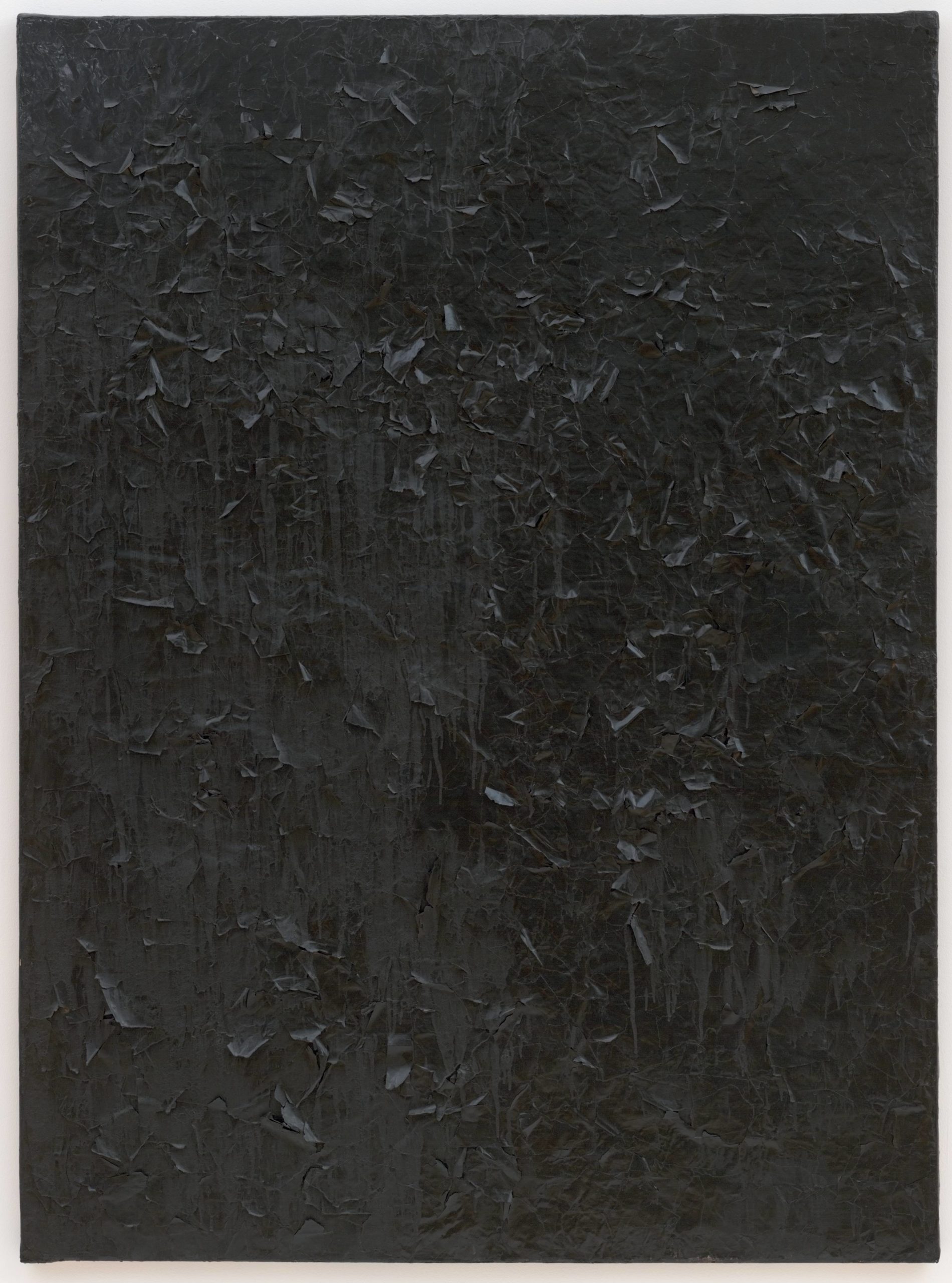 In the late 1940s, American painters developed an art that could be practiced with just two colors: black and white. Critics tended to describe these paintings as an apotheosis, a sign that art had reached a point of exhaustion.1 Artists offered more pragmatic explanations. Of the black-and-white paintings he produced around 1948 Willem de Kooning (1904–1997) recounted, “I needed a lot of paint. . . . I could get a gallon of black paint and a gallon of white paint—and I could go to town.”2 The result was a type of art making that appeared both elemental and alive (fig. 2). Color and line, contour and form—the building blocks of pictorial construction—were isolated to the point that they seemed to function independently, no longer constituents of a picture but whole entities in themselves.3 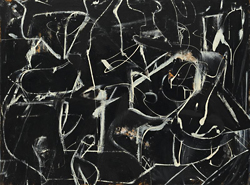 A generation younger than de Kooning and his abstract expressionist colleagues, Robert Rauschenberg was nevertheless part of their artistic milieu, both in New York and at North Carolina’s Black Mountain College, where he studied intermittently between 1948 and 1952. And while Rauschenberg’s art was not always deemed rigorous by the members of the New York School, his work in black and white continues to be an especially lasting contribution to that school’s close scrutiny of painting’s technical means. Among his greatest works related to this chapter in the history of art is Untitled [glossy black painting] (ca. 1951). Few of Rauschenberg’s fragile and highly experimental pieces from the period around 1950 are extant; although this painting has survived it has been subject to modifications—as have many of Rauschenberg’s works—some of which have dramatically altered its appearance.4 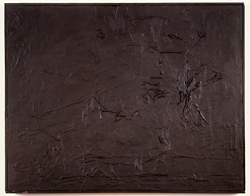 One of the best-known accounts of an early Rauschenberg painting undergoing episodes of change involves Untitled [small black painting] (1953, fig. 3), a work that belonged to John Cage (1912–1992) for more than thirty years and shares a number of similarities with the painting under discussion here. In the summer of 1985, Untitled [small black painting] was returned to Rauschenberg’s studio for repair, and David White, the artist’s curator, took the opportunity to document its history. As he explained, Rauschenberg produced the first version of the painting on top of an existing canvas by Susan Weil, who was the artist’s wife at the time. He then exhibited it at the Betty Parsons Gallery, New York, in 1951, and around this time it entered Cage’s collection.5 Later, while Rauschenberg was house-sitting for Cage, he painted the work black. And finally, in 1985, during its restoration, he painted it black again.6 In all, Untitled [small black painting] bore the traces of three distinct creative deposits by Rauschenberg, and he seems to have felt no need to halt its ongoing development. As he added in a handwritten note to White’s account: “This is part of the history of this single canvas—I hope the dialogue continues for many more years. I will if John dares.”7

White’s history of Untitled [small black painting] refers to a “series of black paintings” that Rauschenberg was working on, and it is to this group that Untitled [glossy black painting] belongs. The Black paintings are typically understood as comprising two bodies of work: the first was begun and ostensibly completed at Black Mountain College in 1951, and the second, also started at Black Mountain during the 1951–52 academic year, was returned to in 1953, after Rauschenberg had traveled in Italy and North Africa. It is not known if Untitled [glossy black painting] was produced as part of the first or second campaign.8 But the work’s facture resembles that seen in paintings associated with the first group, such as the Whitney Museum of American Art’s Untitled [glossy black four-panel painting] (fig. 4), and it explores the ambiguities of “monochrome” in ways that seem more closely tied to the abstract expressionist project than to the later paintings’ concern with the degradation of materials, an interest often linked to Rauschenberg’s 1953 visit to Alberto Burri’s (1915–1995) studio in Rome.9

Untitled [glossy black painting], much like Untitled [small black painting], did not originate as a black painting or even a particularly glossy painting. It was instead created atop an existing composition, some of which is still visible along the tacking margins in the form of red-orange and pink brushstrokes (fig. 5).10 The tacking margins also tell us something about the next phase in the work’s material history, when it took on the general appearance it has now. Visual analysis of the painting’s edges reveals black drips, some wrapping around the sides of the stretched canvas. The direction of these drips, as well as the lack of directionality in areas where paint has pooled on the surface of the work, indicates that Rauschenberg created the painting with the canvas lying flat at least part of the time. This working orientation is significant not only because of Rauschenberg’s storied association with the flatbed picture plane11—the radical, ninety-degree shift relative to human posture that redefined the encounter between image and viewer in the postwar era—but also because of a subsequent intervention that would give Untitled [glossy black painting] the appearance of a vertically made composition. More on this to come.

For the historian eager to set Untitled [glossy black painting] into the context of its making, it is helpful to consider Rauschenberg’s exposure to the ideas of one of his teachers at Black Mountain College, the great colorist Josef Albers (1888–1976). In an interview published during Rauschenberg’s first semester at the school, Albers explained of his paintings, “You see I want my inventions to act, to lose their identity. What I expect from my colors and forms is that they do something they don’t want to do themselves. For instance, I want to push a green so it looks red.”12 A similar desire seems to have motivated the construction of Untitled [glossy black painting], which despite being a monochrome rarely appears only black. By design, the densely textured, almost hyperactive surface catches and reflects light, creating a visual experience that invariably includes a range of colors, from grays to brilliant whites.

Rauschenberg’s inventiveness with painting’s physical means, most specifically his use of paint-dipped newspaper strips as the equivalents of painted brushstrokes, resulted in a composition that readily “loses its identity” in Albers’s sense of that term. Not only do the ribbons of paper that activate the work’s surface create the illusion of a range of color values, there are other unexpected painterly effects to perceive. At the corners of the canvas, where complexes of newspaper strips lie flush with the picture plane, the torn edges might read as drawn lines. At the center of the canvas, where flexible paper pieces lift off the support, their forms “pop” as if outlined in white. The picture both upsets the expectation that artworks register past actions and isolates elements of image making by foregrounding them at their point of contact with the canvas. Rauschenberg, in other words, used the language of Abstract Expressionism to offer yet another redefinition of painting.13 Indeed, this early phase of the composition is not strictly a painting at all. Rather, according to the process by which it was made, it is a collage of brushstroke-size pieces of newspaper held together by the paint that coats them.

I have been arguing that Untitled [glossy black painting] presents a different visual experience from one viewing to the next. It can even change during the same viewing (fig. 6). Over a greater duration, the propensity for chance to intervene increases exponentially, and this was, at least in part, Rauschenberg’s preference. However, his commitment to unpredictability and continuous change would be tested sometime before 1970, when Untitled [glossy black painting] took on a new appearance.14 Rauschenberg’s dedication to allowing works to exist diachronically entailed an ethical resolve that went beyond accepting and reacting to the more-or-less calculated interventions conceived in dialogue with a friend such as Cage. It also meant admitting the potentially deleterious effects of accident. David Prentice, a friend of the artist who occasionally assisted in the studio, recalled that some of the Black paintings in Rauschenberg’s collection were damaged by a careless housepainter who splashed white paint on the works at Rauschenberg’s home or studio. Untitled [glossy black painting] seems to have been among them. In slides in the Robert Rauschenberg Foundation archives (fig. 7), three long drips of white paint streak across its feathery surface, making literal the presence of white that the artist had created through optical highlights. Prentice remembered Rauschenberg’s dismay at the damage, and his own shock at the housepainter’s decision not to move or cover the paintings.15 The white marks undid Rauschenberg’s monochrome. More ruinously, they spoiled the surface by not allowing the torn and crumpled paper reliefs to create the lightest and darkest tones through the attraction and reflection of ambient light. The drips also established a figure/ground relationship that Rauschenberg had deliberately avoided. And because they fell from a consistent angle, they provided a level of orientation, thus breaking the viewer’s sense that each piece of torn paper has its own direction and point of view.

Because the textured surface of Untitled [glossy black painting] is so delicate, any attempt to undo the housepainter’s accident would have been a challenge. But for Rauschenberg, fixing the painting did not mean removing the white streaks. When he returned to the canvas, he ultimately chose to paint it black again.16 Today, the white drips are no longer visible and the painting appears less matte overall, having become glossier and more lustrous over time. More surprising are the large areas of cascading black drips, which the viewer might assume were added to cover the white paint. But they are more than a cover-up. Hardly discreet, these drips are an index of the work’s ongoing creation. The black drips compress the surface, flattening what had once been in relief and introducing a tension between the vertical and the horizontal that was absent in the painting’s earlier incarnation.

In 1953, Rauschenberg was quoted as saying: “My black paintings and my white paintings are either too full or too empty to be thought—thereby they remain visual experiences.”17 Was he prophetic? The fullness of Untitled [glossy black painting] has increased with time. The weight of the paper surface has caused the canvas support to bow slightly, and there are more and different things to see than there were sixty years ago. As much as Rauschenberg’s work of the early 1950s had been championed for its elimination of painterly conventions—no subject, no image, no taste, no object, no beauty, no message—Untitled [glossy black painting] makes the case that Rauschenberg was equally radical for what he was willing to let in—chance, duration, changing context, accidents, a life in the present.18 Historians tell us about the Rauschenberg who pursued a mode of creativity that had “a life beyond its initial conception,” but it is not always possible to observe the process of accretion.19 In 1986, Untitled [glossy black painting] would appear on the cover of Arts Magazine, its identity photographically stilled.20 That was part of the history of this single canvas. As Rauschenberg might have added, there are other parts, too, and more still to come.

Caitlin Haskell is associate curator of painting and sculpture at the San Francisco Museum of Modern Art (SFMOMA). She has curated or co-curated numerous exhibitions at SFMOMA and elsewhere, including René Magritte: The Fifth Season (2018), Edvard Munch: Between the Clock and the Bed (2017), and Portraits and Other Likenesses from SFMOMA (2015). Following her doctoral dissertation on the critical reception of Henri Rousseau, she has published on modern and postwar artists such as Alexander Calder, Donald Judd, and Walter De Maria, among others.
read more 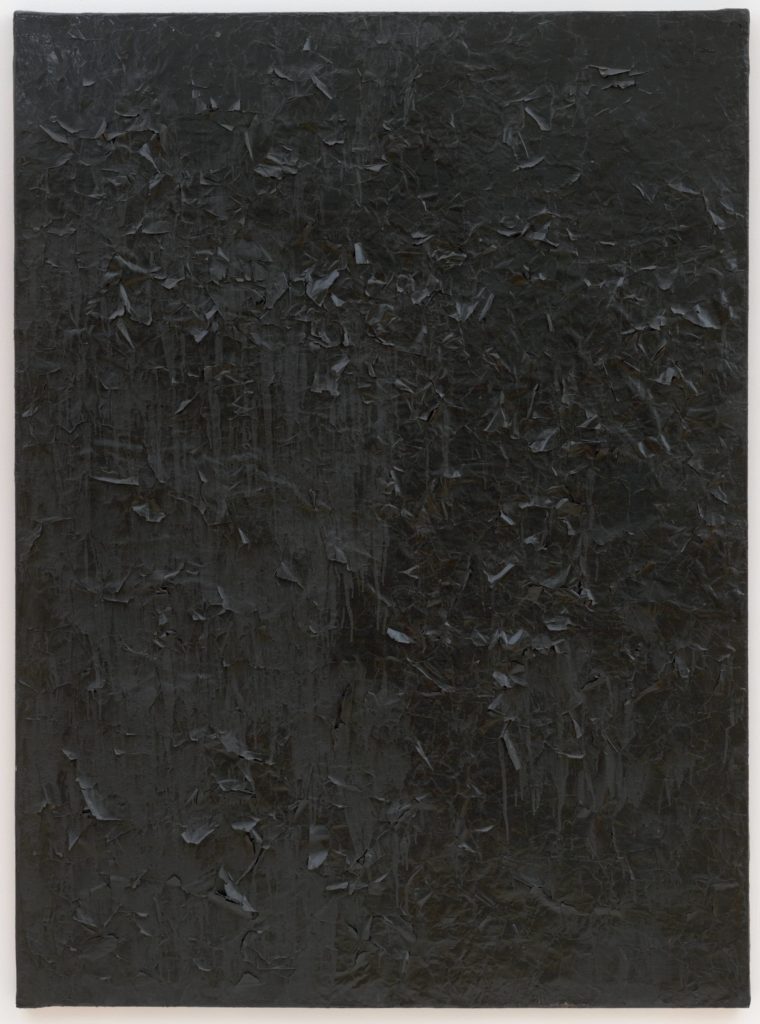