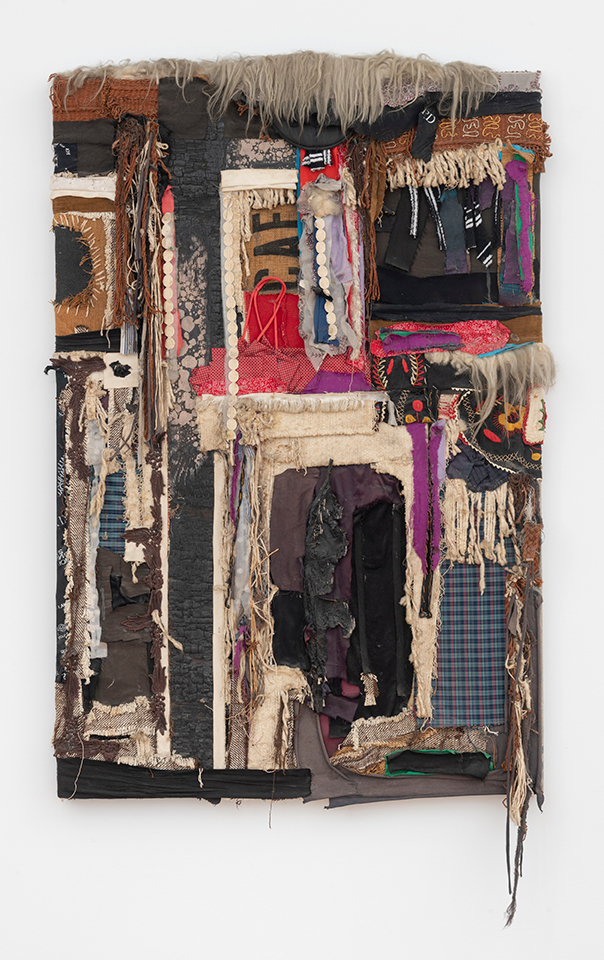 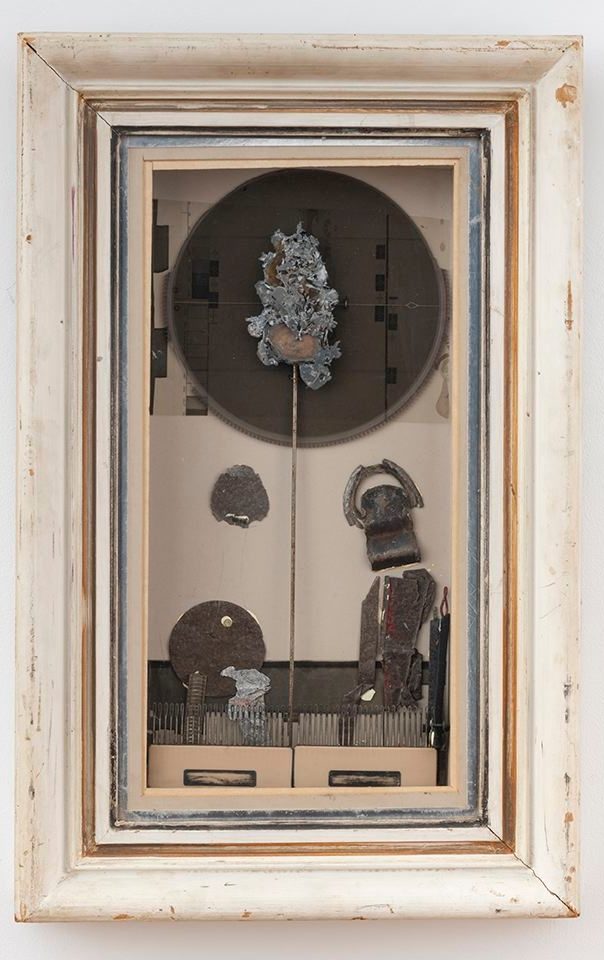 Assembled from frayed cloth, battered metal, and other debris, Noah Purifoy’s Drum Song (ca. 1966) and Rags and Old Iron II (After Nina Simone) (1989) reflect the artist’s commitment to the struggle for Black liberation. Purifoy made his sculptures from remnants of consumer culture, conjuring the ways in which Black Americans harness their resourcefulness in the face of privation. However, Purifoy’s belief in art’s political potential changed over the course of his unconventional career, and each of these assemblages belongs to a pivotal moment in his thinking: while Drum Song celebrates collective emancipation, Rags and Old Iron II points to a more personal deliverance.

Purifoy pioneered the notion that avant-garde art could be an instrument for urban renewal and social empowerment. He studied social services in Atlanta and worked as a welfare officer in Cleveland, before moving to Los Angeles in 1950 and—at almost forty years old—enrolling at Chouinard Art Institute (now the California Institute of the Arts). After earning his degree and working as a furniture designer for several years, Purifoy decided to combine his interests in art and social action. In 1964 he became the founding director of the Watts Towers Arts Center, which brought arts education to the predominantly Black neighborhood of Watts. Here, he witnessed the Watts Uprising of 1965, when members of Los Angeles’s Black community poured into the streets to protest police brutality and economic inequality.

In Drum Song, Purifoy anoints the remnants of the Watts uprising as a beacon of communal rebirth. While the streets were still smoldering, he roamed “Charcoal Alley,” where the fiercest protest took place, and collected detritus transformed by the struggle.1 In the upper middle section of Drum Song is a hardened flow of lead from a broken neon sign, one of the objects that most captivated Purifoy for its “glittering, twisted” knots of metal.2 The neon’s transmutation from radiant lines to metallic clusters reflects the alchemy of the rebellion itself: like Watts, it had undergone a complex, even mystifying metamorphosis. Purifoy mounted this lead at the end of a rod, placed a circular plastic disk behind it, and framed the composition in white and silver. The fragment resembles a religious relic or idol, the disk its halo, like an icon of Watts’s collective apotheosis.

Drum Song was a public signal and a call to action. It articulated Purifoy’s guiding belief that “art of itself is of little or no value if in its relatedness it does not effect change.”3 In 1966 Purifoy included this work in a group show of assemblages made from the uprising’s debris, called 66 Signs of Neon. The exhibition was intended to empower Los Angeles’s Black community and signal the fight for equality; it had the specific purpose of effecting the change that Purifoy wished to see.

66 Signs of Neon traveled throughout the country for several years, but the circumstances of Purifoy’s community of Black Angelenos failed to improve. Over time, his political perspective changed. “Once, I thought art was the only problem-solving mechanism left for poor people. This still may be true, but how far do we have to go to get there,” he wrote in the early 1970s. “I am going to stop fooling myself into believing that my art helps the cause.”4 He soon abandoned sculpture and returned to social work, serving as director of social services at the Central City Community Mental Health Center in Los Angeles before becoming a founding member of the California Arts Council, where he stayed for more than ten years.

When, in 1987, Purifoy left his post and returned to art, his practice shifted away from public engagement. Unable to find an affordable studio in Los Angeles, he struggled for two years before joining fellow artist Debbie Brewer on her property in Joshua Tree, California. At seventy-two years old, Purifoy left his urban community for the desert, where he worked privately on outdoor assemblages until his death in 2004.

Rags and Old Iron II (After Nina Simone) dates from the year of Purifoy’s migration and may reveal a new sense of freedom that he found in the desert. The title references a song by Nina Simone, in which she addresses a ragpicker—a figure who salvages materials for survival. Purifoy performed a similar task in Joshua Tree, driving his truck through the desert to gather refuse from residents and businesses. His assemblage conjures these cycles of collection and reuse. Clumps of yarn, grubby wool, metallic tinsel, burlap, and plaid cover a plank of charred wood, layered until the support is barely visible. Unlike Drum Song, this work does not frame a special object of political significance. Instead, it enacts the day-to-day ingenuity of a life outside official systems of work and trade. The ragpicker symbolizes the new political role Purifoy performed in his desert project as he carved out a space beyond the inequities of the modern city and repurposed what it deemed unwelcome. The drooping, tattered scraps of Rags and Old Iron II are melancholic, but their vividness and abundance also celebrate a life on the fringes.

Purifoy continued to believe that art could effect change, even as the terms of this change shifted from public to private, revolutionary to personal. He may have questioned his art’s ability to remake the world, but Rags and Old Iron II suggests that he remained convinced that the artist could transform his own. 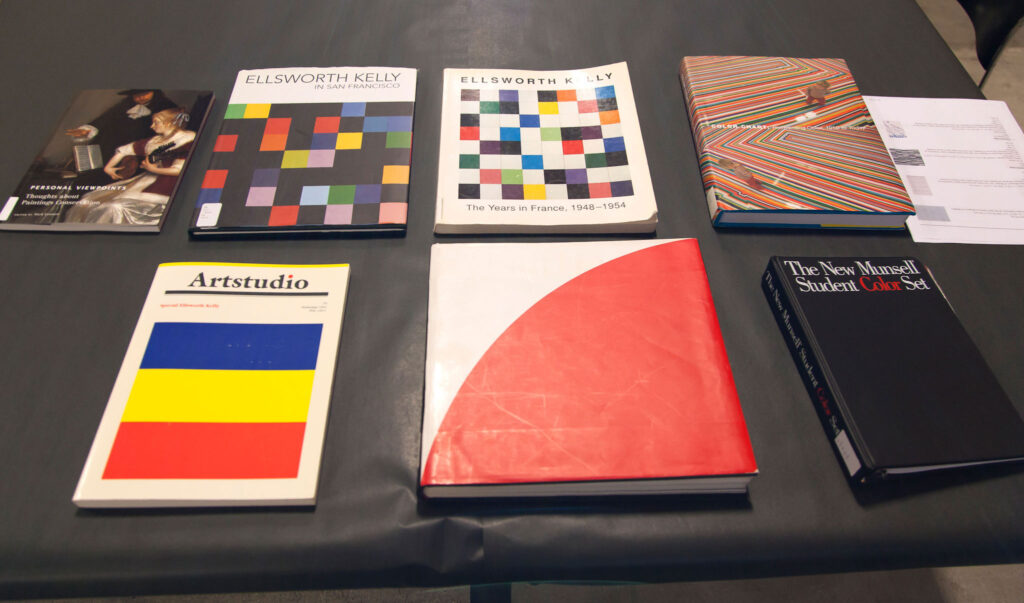 Our Research and Publications

Take a look at new ideas about artists and artworks that push the boundaries of museum practice through our research projects and publications.