SAN FRANCISCO, CA (March 11, 2021)—The San Francisco Museum of Modern Art (SFMOMA) announces a major gift of 31 paintings, sculptures and drawings by 20 American artists from the Pamela J. Joyner and Alfred J. Giuffrida Collection—celebrated for its intergenerational holdings of abstract art of the African diaspora. The addition of important historical works by Elizabeth Catlett, Beauford Delaney, Norman Lewis and Richard Mayhew, among many others, has inspired a reexamination of SFMOMA’s permanent collection and is having a transformative impact on its galleries.

The extraordinary gift enables SFMOMA to feature a broader range of artists’ contributions to key modernist movements, and to explore their extensive social networks and associations in cities across the United States and abroad. This group of works plays a foundational part in the museum’s long-term goals to present the history of American art through multiple perspectives and voices, and in dialogue with wider international contexts. In addition to adding new artists and stories to the museum’s holdings, the Joyner/Giuffrida Gift provides an opportunity to reimagine SFMOMA’s permanent collection from the inside out.

“We are thrilled by this generous and transformative gift to SFMOMA and inspired by Pamela and Fred’s more than two decades of outstanding collecting and advocacy for Black artists,” said Neal Benezra, Helen and Charles Schwab Director of SFMOMA. “These important works strengthen the museum’s collection in critical ways and allow us to present a richer, more expansive picture of art history.”

“This group of artists was written out of mid-century modernist history only because they were Black. What I want visitors to take away is that there were people of color not only working in the field, but defining the character of the movement at that time,” said Pamela J. Joyner. “SFMOMA is playing a major role by contextualizing these works where they always should have hung. That is a major rewriting of art history to tell the whole story.”

Joyner, a collector for many years and an SFMOMA trustee since January 2020, worked with former Elise S. Haas Senior Curator of Painting and Sculpture Gary Garrels to carefully select pieces to fill in historical gaps. The gift helps propel forward other recent efforts SFMOMA has made to diversify its collection, such as the establishment of the Peggy Guggenheim Fund in 2019. Furthering those efforts, “the gift shows us the stories we missed, holds up a fresh lens to the stories we’ve been telling and points our acquisition strategy in new directions,” said Sarah Roberts, Andrew W. Mellon Curator and Head of Painting and Sculpture, who is working with Joyner and Giuffrida on the installation and interpretation of the gift.

Drawing on his Black and Native American heritage, Richard Mayhew addresses North America’s violent history of colonialism and land control in his landscape paintings, which are on view in a focused gallery of works by the artist on SFMOMA’s Floor 4. The stunning scenery he depicts may seem an unlikely protest against these injustices, but the artist quietly overturns the genre’s conventions to reclaim the wilderness for the dispossessed.

The American landscape tradition, as exemplified by the Hudson River School of the 19th century, often promoted white settlement by offering elevated perspectives over sweeping vistas, opening up the wilderness for visual consumption. These artists habitually omitted Native Americans and enslaved people or placed them in the shadows as part of the scenery. Mayhew, by contrast, places viewers themselves within the terrain. Instead of exposing nature to our gaze, he uses the technique of sfumato, in which tones bleed into one another, to produce a hazy evanescence that verges on abstraction. Colors of different hues but similar intensities create what Mayhew has called “optical illusions” that disrupt the eye’s focus. Such effects transform the wilderness into a spectral, spiritual space that resists visual control—a landscape that cannot be conquered.

Richard Mayhew is on view as part of the ongoing exhibition Approaching American Abstraction on SFMOMA’s Floor 4, which explores the diverse approaches to abstraction developed since 1950, from the forceful brushwork of Lee Krasner and the calligraphic strokes of Norman Lewis to the contemplative canvases and reliefs of Ellsworth Kelly and the enigmatic wood forms of Martin Puryear. 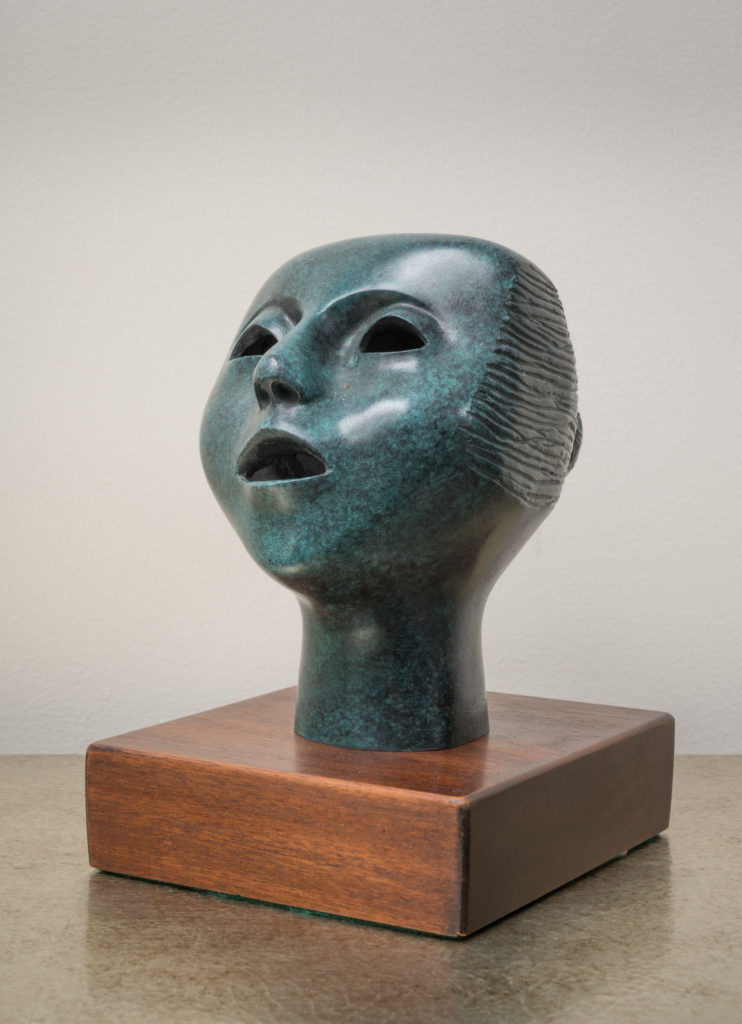 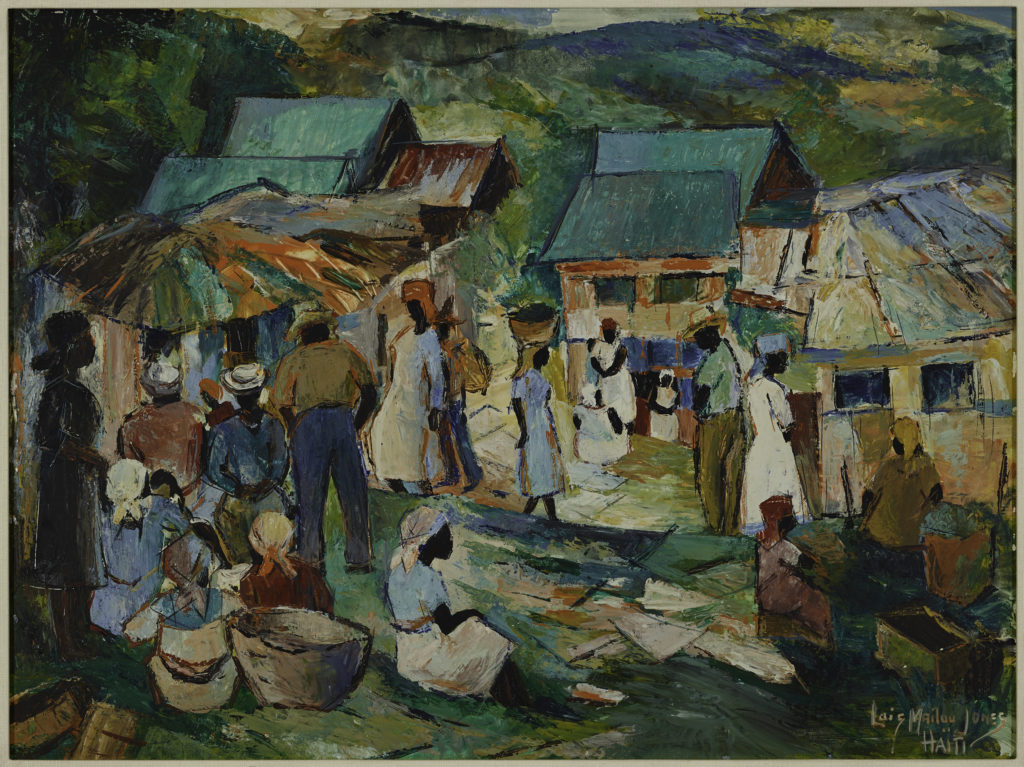 Catlett’s Cabeza Cantando (Singing Head) (1968) is a patinated bronze sculpture that portrays the stylized head of a woman singing. The subject tilts her head back in reverence and opens her mouth in song. Mailou Jones’s Peasants at Kenscoff (1955) depicts a group of people gathered at the Kenscoff commune, southeast of the capital city of Port-Au-Prince, Haiti. The artist illustrates the popular weekly market on the hillside where rural farmers gather to sell their goods and produce to the community of Kenscoff. Visitors will be able to see these works on SFMOMA’s Floor 2 among work by other artists working in the United States, Mexico, Haiti and beyond in an installation called Modern Americas. Catlett and Mailou Jones, along with Sargent Johnson, engaged with the intellectual discourses of the Harlem Renaissance from different perspectives, responding to the call for Black self-representation and empowerment. Finding inspiration in Mexican, African and Caribbean visual cultures, they created new visions of American life and identity. Attuned to the ways in which their work could be a tool for social change, these artists broadened notions of who art should serve and represent and redefined the artist’s role in society.

In Lee-Smith’s Two Boys (1968), a pair of figures on opposite sides of a crumbling urban landscape appear isolated from each other yet visually connected by their parallel positions. While the artist addressed the struggle for racial and social justice directly in his early Social Realist work and during his many years as an educator, in the 1950s and 1960s he adopted a Surrealist style he later called “metaphysical.” These meditative compositions blend remembered and imagined subjects in stage-like settings reminiscent of American cities to uncover a deeper shared experience of social alienation. Lee-Smith once said, “I think my paintings have to do with an invisible life—a reality on a different level.” When the museum reopens, visitors can view Lee-Smith’s Two Boys on SMOMA’s Floor 2 in a presentation called Transatlantic Surrealism that traces highly original engagements with Surrealism that propelled the development of the movement on both sides of the Atlantic from its inception in the 1920s through the end of World War II and beyond. From the dreamlike landscapes of Lee-Smith, Yves Tanguy, Dorothea Tanning and Kay Sage to the powerfully symbolic works of Wifredo Lam and Maria Martins that mine visual traditions and rituals of the African diaspora, the works in this gallery reflect a shared interest in dreams, the unconscious and the value of irrationality and chance as inventive forces.

The field of bold orange, yellow and black marks that captures the intensity of sunlight and structure the composition in Delaney’s Untitled (1974) hint at an elusive subject. Delaney made this work decades after he left New York in 1953 for Paris, where he joined a community of African American artists, writers and musicians. There, he became known for abstract studies of light and expressionist portraits, two modes he found deeply intertwined. As the artist described, “The scope of painting is so vast…[It] expresses itself sometimes in naturalistic pictures and at other times variable abstractions of color—mostly of the sun or some form of light.” Visitors can view Delaney’s Untitled on SFMOMA’s Floor 2 as part of the installation Expressive Abstraction. This gallery features a generation of artists working in the U.S. and abroad beginning in the 1940s, who sought to eliminate representational subjects from their paintings and instead embraced the expressive potential of color, line and gesture in their abstract compositions. The small- and large-scale paintings by Delaney, Philip Guston, Joan Mitchell and Mark Rothko on view are distinct in form and style, but each work serves as a site of existential meditation and bodily experience for the maker and viewer alike.

In fall 2021, works from the Joyner/Giuffrida Gift by Delaney, Herbert Gentry and Sam Middleton will also be featured in a gallery on SFMOMA’s Floor 4 titled Americans in Transit alongside works by Lawrence Calcagno, Sam Francis, Shirley Jaffe, Joan Mitchell and others who spent formative years in Europe. Fueled by new visual experiences as they landed in capitals such as Paris, and traveled and exhibited widely, these artists folded new sights of cities and landscapes into their abstract compositions and participated in the accelerating international circulation of artists and artworks after World War II.

San Francisco–based Pamela J. Joyner and Alfred J. Giuffrida initiated their collection of abstract art by Black artists in the 1990s. With their mission-driven collection of now over 300 works, the couple seeks to reframe art history, helping shed light on a more diverse canon. Rather than open a private museum, Joyner and Giuffrida have underscored their interest in working with existing institutions to tell a fuller and more accurate story of art history.

At SFMOMA, where Joyner serves on the Board of Trustees, the collectors’ vision is to work with curators to integrate works from their gift into installations of the museum’s existing holdings in order to put them in context, presenting a more complete arc of art history and celebrating an intersecting and diverse network of perspectives and narratives.

One third of the works from the Joyner/Giuffrida Gift were installed throughout SFMOMA’s permanent collection and Fisher Collection galleries in fall 2020, including a focused rotating installation dedicated to Richard Mayhew. Works from the collection will continue to be integrated into the museum’s collection presentations in 2021 and beyond. The gift additionally provides the basis for new research initiatives and informs potential acquisitions in the near- and long-term future.

SFMOMA will pursue new research on the Joyner/Giuffrida Gift and plans to create related content for a global audience on sfmoma.org. SFMOMA’s commitment to sharing scholarship on these artists and artworks reaffirms the museum’s dedication to centering underrepresented voices and expanding the stories told through the artworks that are featured in the museum’s galleries and continually brought into the museum’s permanent collection.

The San Francisco Museum of Modern Art is one of the largest museums of modern and contemporary art in the United States and a thriving cultural center for the Bay Area. Our remarkable collection of painting, sculpture, photography, architecture, design and media arts is housed in an LEED Gold-certified building designed by the global architects Snøhetta and Mario Botta. In addition to our seven gallery floors, SFMOMA offers 45,000 square feet of free, art-filled public space open to all.