We asked our resident poster expert, associate curator Joseph Becker,
to walk us through a few selections from decades of political action.

A successful political poster is transformative. At its most effective, it turns image to emblem, onlooker to activist, text to chant. At its most potent, it embeds in the cultural zeitgeist, eventually moving from the outstretched arms of demonstrators to the pages of history books.

At last count, there are nearly 500 political posters in SFMOMA’s collection, a testament to the role graphic design plays in inspiring and informing that type of political action. The assortment includes posters crafted by famous artists and disseminated around the globe, along with anonymous pieces that underscore the Bay Area’s rich history of hyperlocal activism. Spanning the 1960s to the present day, almost all are recent acquisitions made under the direction of Joseph Becker, an associate curator of architecture and design. Studying them has been an ongoing focus for Becker, who joined the museum in 2007.

“The medium of the poster is not just print, but language,” Becker explains. “These posters don’t need to be considered ‘art’ but must be recognized for their artistry. They have become a critical element in organizing and activating communities in response to some of the most pressing issues of our time, bridging radical and populist movements, political dissent and ascension, and encouraging civic engagement and empowerment.”

“They also hold a record of our culture,” he adds. “They give us a chance to act, both as individuals and as part of a collective.”

We asked Becker to walk us through a few examples from the collection. The issues these posters represent are as varied as the tactics they use to express them, but all share a skill for rousing political imagination. 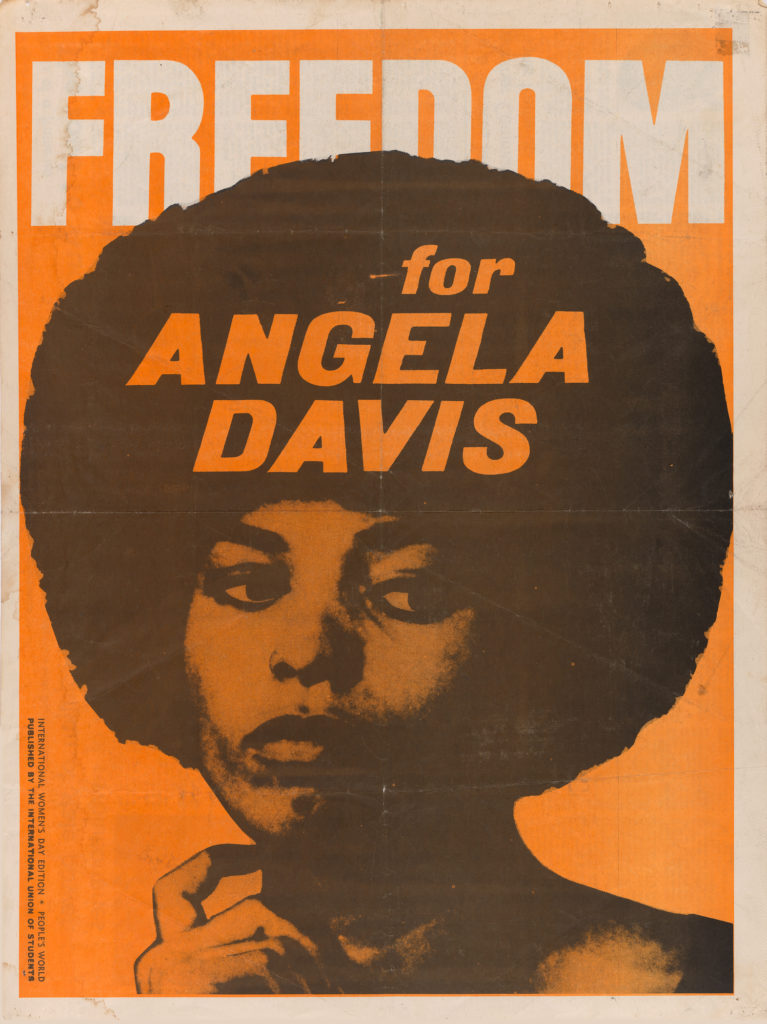 “The simplicity of this poster’s two-color silk screen works brilliantly with the bold typeface and composition, knocking out the text from the background and the powerful blackness of Davis’ natural hair,” Becker says of this poster, featuring Angela Davis. The educator and activist’s wrongful imprisonment for murder in 1970 helped transform attitudes about the U.S. prison system and led to the development of several organizing groups that still exist today. Published in People’s World, a periodical focused on labor and democracy, this poster represents just one of many from a global pressure campaign to set her free.

Many of the posters reflect the slow churn of progress, such as this one by Jesus Forjans. “The text’s bold call to action hovers over a standoff between a protester and a police officer, who wields a baton as a show of force,” Becker says. “It’s from OSPAAAL – the Cuba based Organization of Solidarity with the People of Asia, Africa, and Latin America. The group advocated for human rights and mobilized against the rise of imperialism and neoliberalism.” 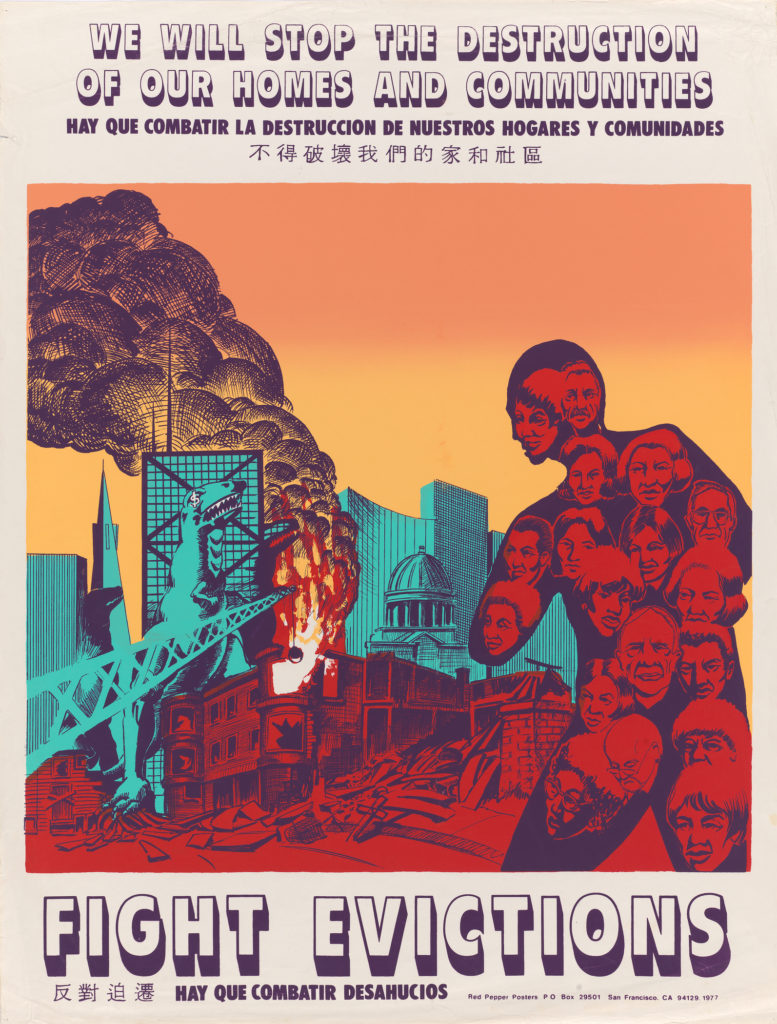 The museum’s poster collection tracks some of the most evergreen issues in Bay Area politics. Morgan’s poster, which includes a call to action in three languages, is a symbolic entry in the anti-displacement genre. “Morgan illustrates a neighborhood burning under the shadow of the Transamerica Tower, City Hall, and other buildings representing capitalism,” Becker explains. “It shows the tense battle to preserve communities in San Francisco threatened from the waves of evictions of the 1970s.” 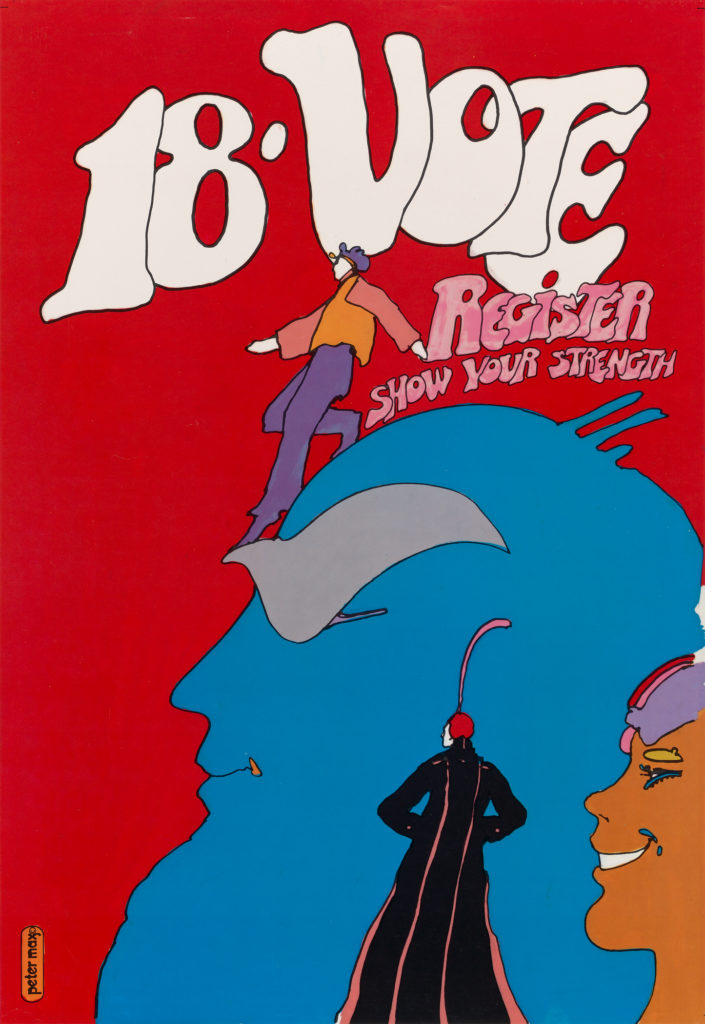 Designed to encourage voter registration among newly minted adults, Max’s poster contains stylistic hallmarks oft-seen in the later-half of the 1960s. “The format of the political poster was catapulted as a tool in the mid 1960s, quickly expanding nationally and internationally across diverse topics,” Becker explains. “Peter Max’s recognizable graphic style was synonymous with the decade’s bold and often psychedelic illustrations, and this poster is aimed directly at the youth vote.” 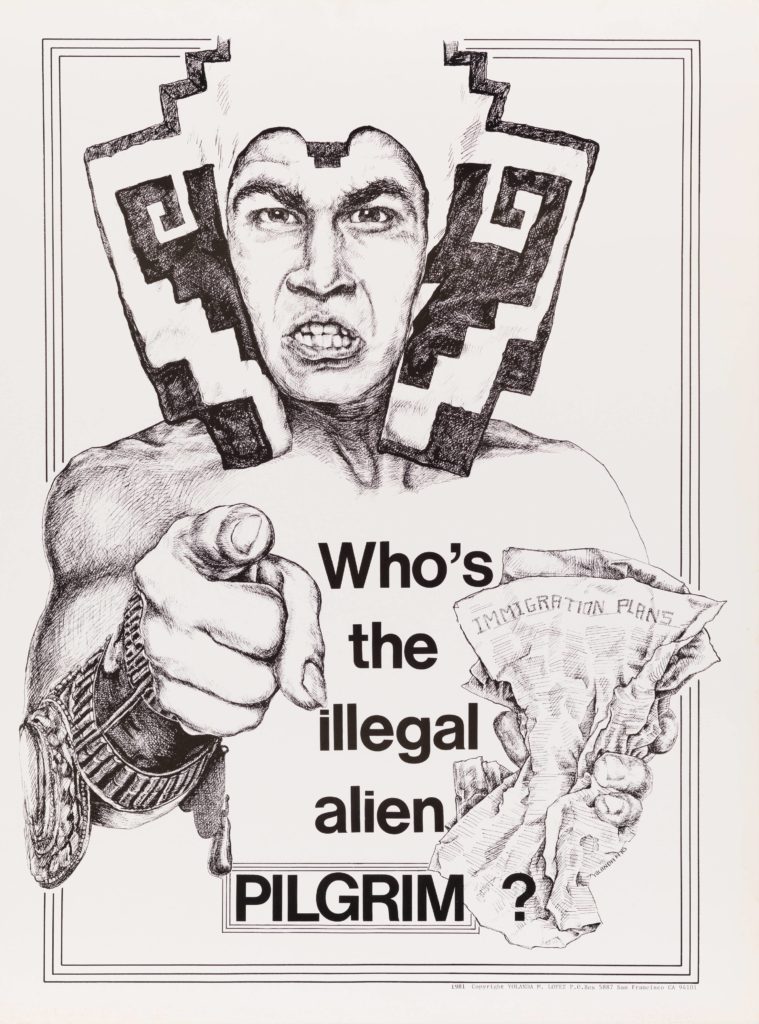 Lopez’s poster isn’t directed at those she wants to motivate or mobilize. Instead, it’s aimed directly at her opponents, boldly reminding them of an inconvenient truth. “The poster is a fierce commentary on the U.S. immigration policy of the 1980s,” Becker notes. “The text and illustration call out the hubris of anti-immigration attitudes, a topic that continues to resonate loudly today.” 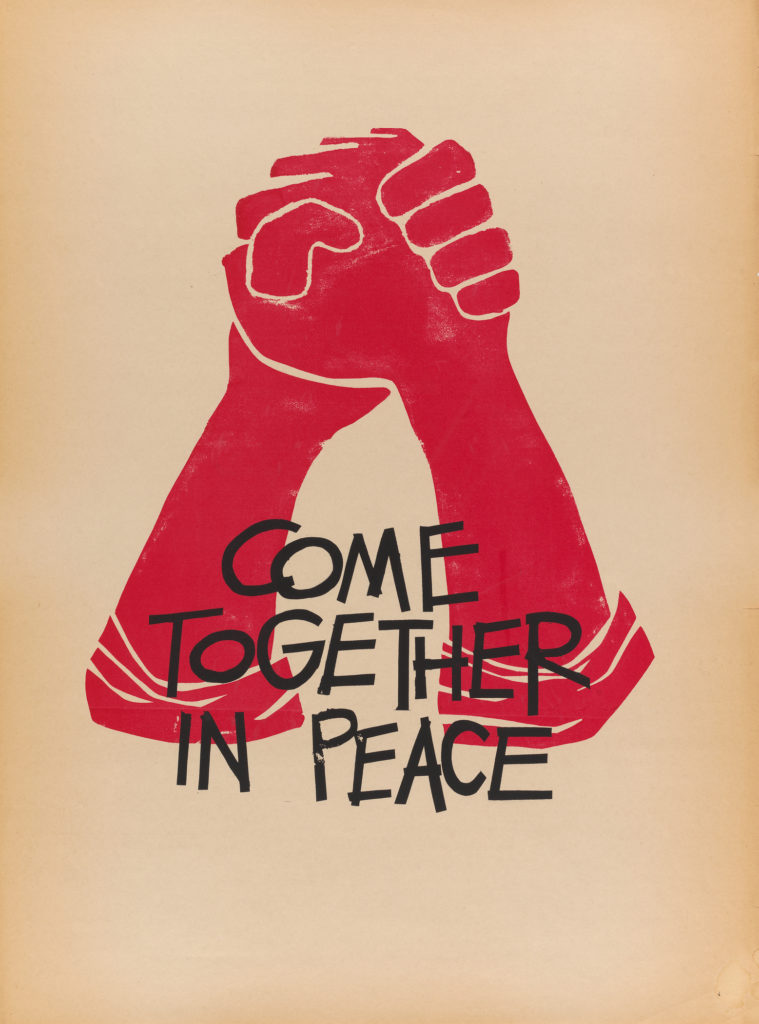 Come Together in Peace, 1968, unknown artist

“Like many political posters, this silkscreen print is unsigned and information on the artist is incomplete,” Becker notes. “It is understood to have come from an anti-Vietnam War poster making event at the Rhode Island School of Design in 1968. The hands clasped show solidarity in bridging divides and uniting towards a shared goal – something woefully lacking in today’s politics.” 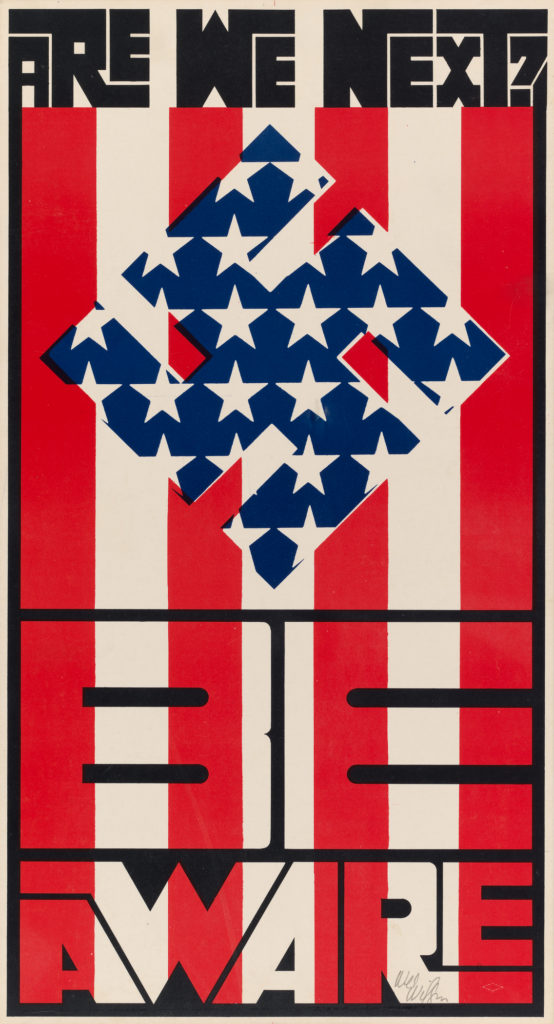 This was the first poster Wilson ever created; his continued disgust with the Vietnam War prompted the idea. It is by nature designed to make you look twice and question its allegiance, to call you from complacency. “It’s one of the most triggering posters in the museum’s collection, and it speaks volumes in today’s climate,” Becker notes. “Wilson designed this in San Francisco in 1965 and subsequently became one of the most important poster artists of the Psychedelic Rock era, pioneering the vibrating, melted typography often seen in hallucinogen-inspired prints.”

Posters can, on occasion, so successfully reappropriate a symbol that its original connotations become secondary, as is the case with this entry. “With ACT UP and the Silence = Death organizations, Avram Finkelstein created perhaps the most iconic poster to raise AIDS awareness and to protest discrimination of sexual preference and gender,” Becker says of this poster. “The pink triangle – now a symbol for AIDS activism – was purposefully co-opted from the Nazi Party’s targeting of gay and lesbian individuals.” 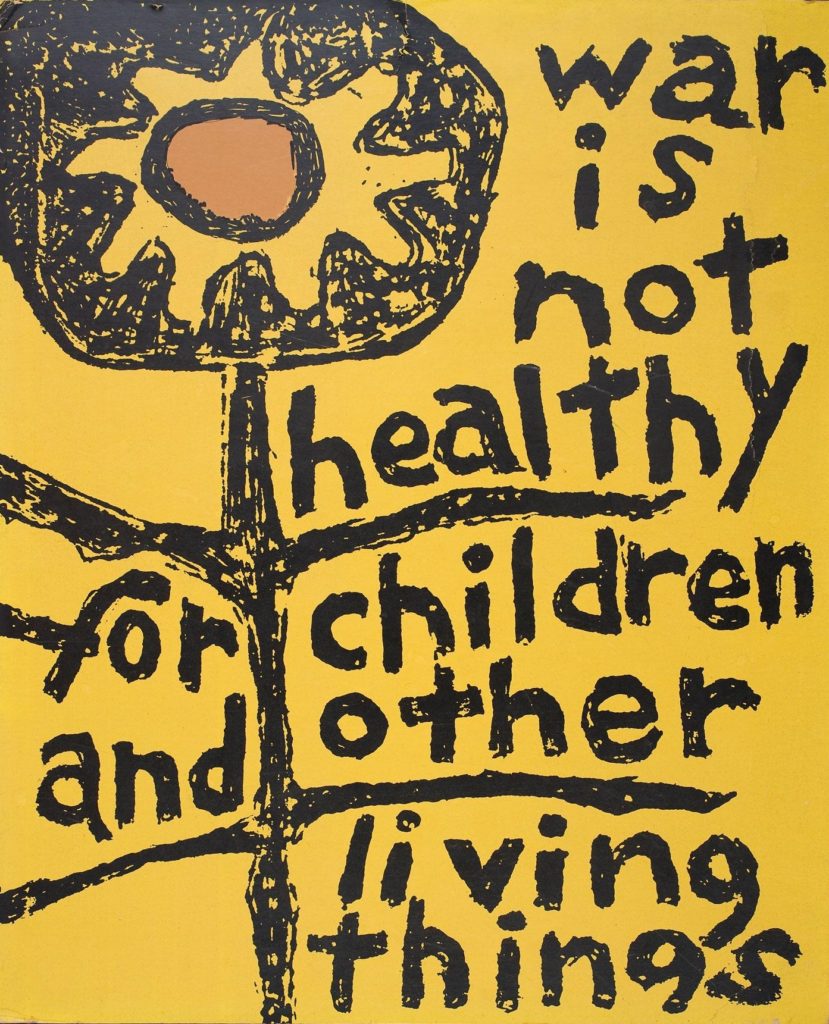 War is Not Healthy for Children and Other Living Things, 1967, Lorraine Schneider

Some aesthetics move out of style only to reemerge decades later. Created for Another Mother for Peace, this enduring print from Schneider shares stylistic elements with activist guidebooks that proliferate today across social media. “Another Mother for Peace is an anti-war organization founded in 1967 to educate and empower women and is still active today,” Becker explains. “This poster’s simple and irrefutable message, drawn in an almost child-like manner, became the group’s logo and has been globally distributed in dozens of formats.”

“Another unsigned poster from another on-campus printmaking workshop, this is one of dozens understood to have been created on the University of California, Berkeley, campus in 1970, at a moment rife with division across the country and the world,” Becker says. “It attempts to diffuse any stigma that an anti-war attitude is an anti-democratic one.” 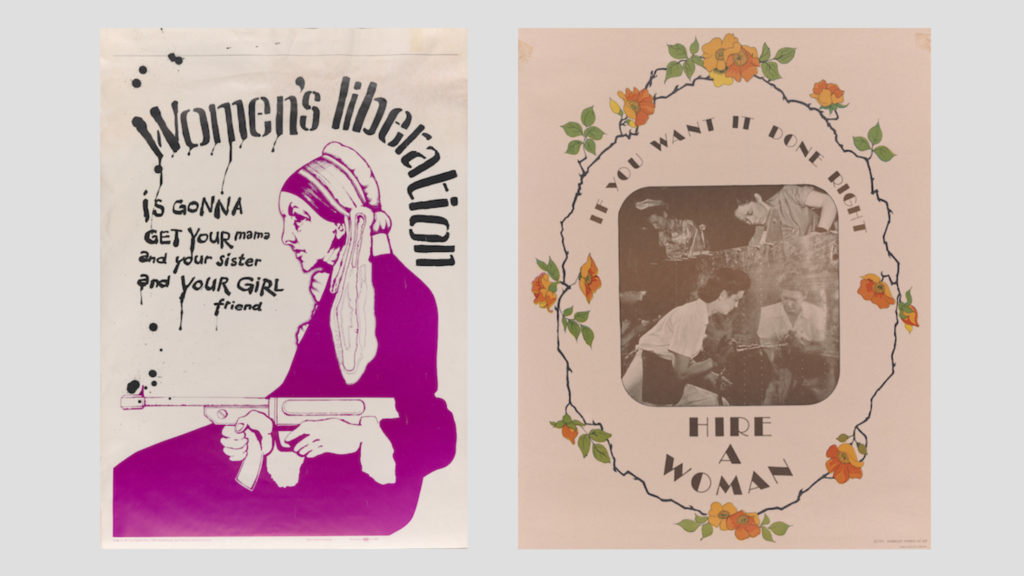 Insist, Persist, Resist: An Invitation to Action for Women’s Liberation 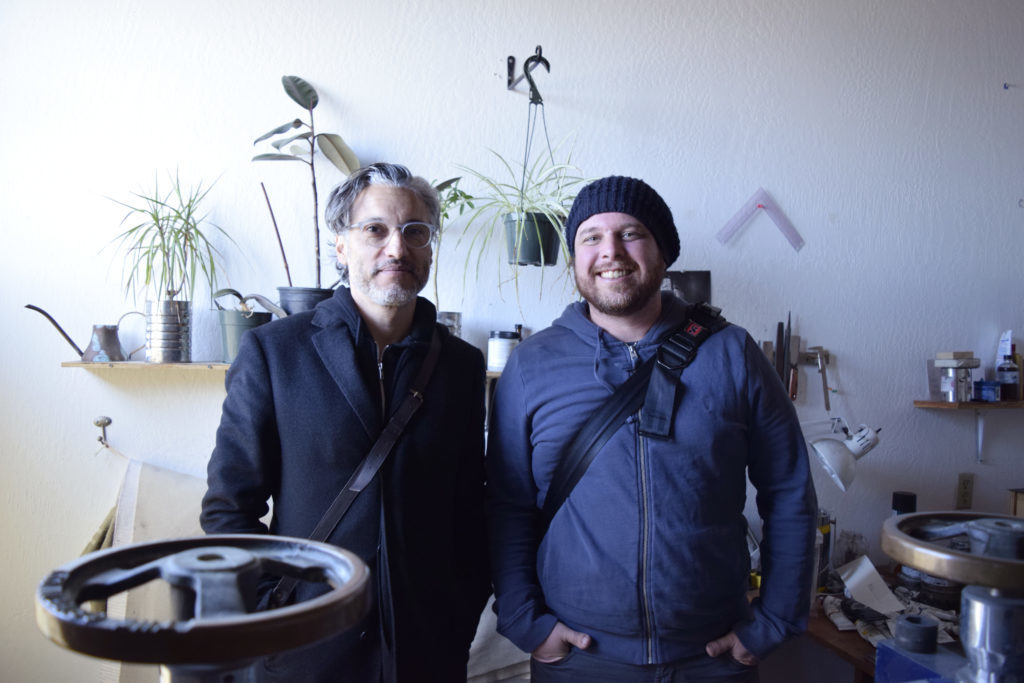 How to Make a Political Poster – Open Studio 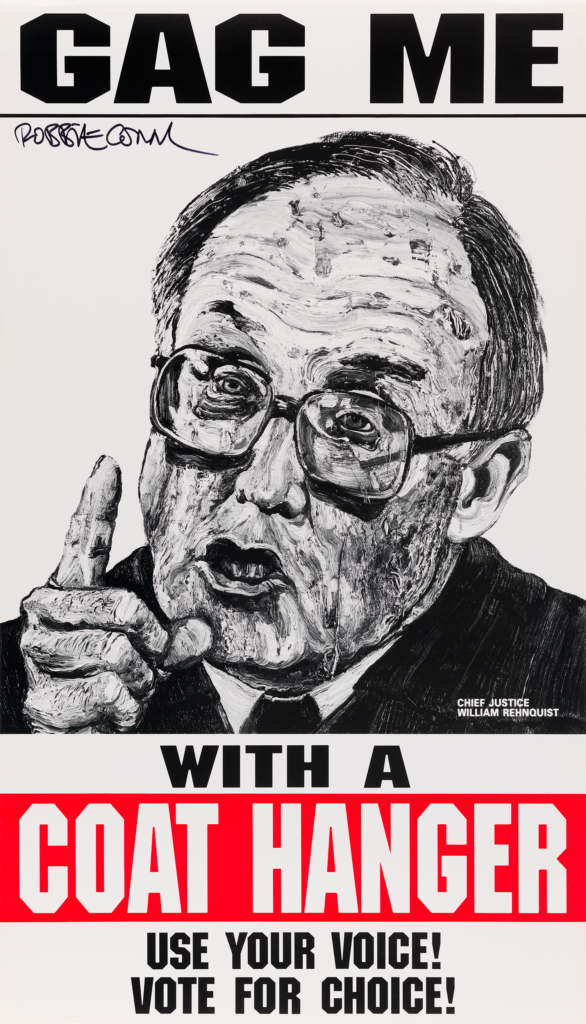 The Art of Raging Against the Machine