A Conversation with Naomi Rincón Gallardo and Sophia Wang

On March 16–17, 2017, Naomi Rincón Gallardo’s work The Formaldehyde Trip will debut as part of Performance in Progress. For this performance, Gallardo collaborated with several artists, including Sophia Wang, who created choreography for the piece. 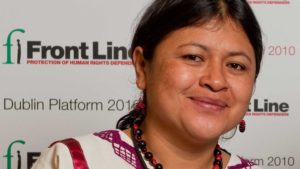 SFMOMA: Let’s talk about the role of movement and choreography in The Formaldehyde Trip.

Naomi Rincón Gallardo: The Formaldehyde Trip is a speculative critical fiction. It imagines a tribe of “new mestizas” (borrowing Gloria Anzaldúa’s notion) who accompany Bety Cariño in her journey to the underworld. The tribe belongs to a time that is not yet here, but that is rooted in interrupted moments of struggle and also in suppressed cosmologies and knowledges. Its members are creating a radical way of connecting with one another, so they need a different language, made up of body language and movement. They are articulating a vocabulary that corresponds to an alternative future and the movement of their bodies is part of it.

Sophia Wang: The movement and choreography in the work serve representational and expressive functions, to make explicit certain narrative elements and some fairly specific character roles. For the ensemble scenes, the movement communicates the work, play, transgressions, and acts of resistance and solidarity shared by this underworld crew of queer feminist warriors. We also worked on solo choreography for the fascist, colonizing villain character. The movement language for that character was explicitly militaristic and combative to correspond with the video game–style military march composed for that scene. So the narrative structured the different sections into something like a song cycle, and the performed movements contributed to the visual elements working with the sound composition and design. The way the video editing ultimately structures the performed choreography may also use the movement elements in the way that music videos or dance films compose movement for the camera. 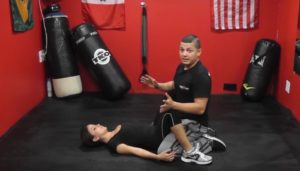 SFMOMA: Choreography is such a physical endeavor, but you live in different cities. How did you structure your collaboration to compensate for not always being able to work in close proximity?

NRG: Sophia and I had an extensive dialogue on what we wanted to create together. I shared with her the lyrics, and some texts I was dealing with, and explained what I was envisioning. She replied with references and ideas for choreographies. We had some shared sources of inspiration: feminist self-defense tutorials, images of indigenous rebel women, and some verbs and concepts for transformation — bridging, caring, fighting, weaving, domestic labor, talking back, sharing, empathy, reciprocity, laughter, giving birth, standing up, failing, saying no, saying yes, resting, negotiating, casting a spell, reclaiming, resisting, opposing, exposing, defying, opening up, enriching, disturbing, making visible, moving beyond, facilitating, celebrating, creating new symbols. We had several Skype conversations, and Sophia made some video tutorials, which were a pretty effective tool for learning! For the parts filmed in Mexico, I played the tutorials while we were shooting, and with help from one of the crew members we managed to follow the movements. I believe in de-professionalization as a strategy to gain autonomous skills, so I really enjoyed working in this playful, de-professionalized way. In San Francisco, Sophia led the choreographies, which was an amazing experience. We did warm-ups together, gained confidence, and enjoyed belonging to a certain ephemeral community.

SW: Naomi and I met via video conference to discuss the concept for The Formaldehyde Trip and the sections where I’d be contributing choreography. It was a new experience for me to develop movement without working directly with the dancers or at the performance site, so I wanted to start with a full understanding of Naomi’s concept for each section. We talked about set and site elements, how each scene contributed to themes and character archetypes of the piece, and the music accompanying each scene. Naomi also gave me a wide range of references to work with: sketches for costumes, song clips and lyrics, writings that had deeply informed the project, images and videos of organized resistance led by indigenous women in Mexico. So, working independently here in San Francisco, I had plenty of images, concepts, and music around which to develop qualities and types of movement. As Naomi mentioned, for the scenes shot in Mexico City, I made tutorial videos for her and her performers to work from. Here in San Francisco, we had several full days of sharing material with the performers, rehearsing, and performing on site for the video shoot at Galería de la Raza. The conversations and resources we shared were crucial for imagining how to set movement for performers I hadn’t met and in spaces I hadn’t seen, and of course we brought in new elements and improvisations once we were working together in person. 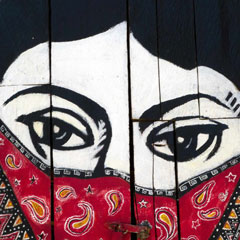 SFMOMA: Protest movements, especially in relation to women’s movements, have often focused on the corporeal physicality of their subjects. How does the choreography for The Formaldehyde Trip relate to or depart from this tradition?

NRG: Beyond the intellectual/cool/detached registers, emotions and the physical reality of bodies coming together are crucial elements for social transformation or community building. I understand each project as a frame for encounters, involving surprise, contradiction, emotions, and conflict. From an intersectional perspective, bodies and their corporeal reality are constructed within different articulations of class, gender, race, body size, age, stories of migration, abilities, et cetera. And within all those differences, I am interested in seeking affinities rather than identities. In the face of the dystopian times we are facing, we need to create critical spaces that take difference seriously, and yet simultaneously embrace humor, pleasure, contradictions, failure, hope, and desire. 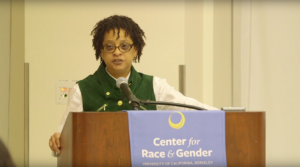 SFMOMA: Naomi, your work frequently deals with the dispossession of lands, cultures, and bodies. How do mass migratory movements of people relate to the choreography developed for The Formaldehyde Trip?

NRG: Bety Cariño’s story is a repetition of past stories and of stories that carry on after hers. Despite the structural racist, capitalist, patriarchal power to render indigenous women as dispensable, a new female indigenous subject has been emerging from inventive social struggles and uprisings to contest dispossession in the so-called Global South. Rebel indigenous women have dared to fight the stigma of being a passive resource to be raped and exploited. Such disobedience has been violently contested with an onrush of entangled systems of terror and repression accompanying ongoing neocolonial extraction. State violence, enforced displacement, new laws legalizing pillage and criminalizing protest, and formal and informal militarization produce geographies of fear among entire populations, which altogether serves to guarantee the control of territories. In the case of Mexico, such processes are brutally interwoven with expressive violence and the creation of an inner enemy that fosters a state of exception as the rule, which justifies further militarization. Marginal lives in these geographies of fear are bound to be forgotten and to remain outside of the historical record. As Sharon Patricia Holland claims, mattering of such lives is not taken for granted, but rather something to be achieved. I wanted to create a choreography that could work as a sign for exuberance, play, and desire against both oblivion and paralyzing forces of terror.

SW: I looked for the dynamics of mass migration in the social and signifying functions of the choreography. How does the choreography organize a group of people, and what information is being transmitted, whether through symbolic gestures, or through replicating or disrupting traditional dance modes and movements? The work seemed interested in modeling a third way out of some thematic binaries (for instance assimilation into dominant culture versus isolating ethnic essentialism, neoliberal hedonism versus sober, principled separatism). This gave us a lot of freedom to draw from movement traditions that might be at odds with one another: not as a resolution between, say, the fascist undertones of military drills and total movement synchronization versus the orgiastic and anarchic energy of disorder, but as a resourceful and strange hybridization of different modes for different pleasures and purposes. This seemed like the best way to express in movement the dynamics of a social body engaged in the struggle and play of self-determination, and the defense and reclamation of its resources, both intrinsic and adopted.

Sophia Wang creates and performs movement-based works in collaboration with performance artists, writers, and visual and sound artists. She earned a PhD in English from U.C. Berkeley, and integrates her research and performance practices through writing and curatorial projects focused on critical somatics: thinking with and as bodies.

With an interest in radical histories and speculative fictions, Mexico City-based artist Naomi Rincón Gallardo works across performance and video to investigate utopian possibilities and belief. Her often music-based narratives draw on counter-cultural forms like punk, DIY aesthetics, and queer identities to reframe touchstones in Mexican and Mesoamerican politics. As both an artist and an educator, she foregrounds research tools from feminist theory and radical theater to imagine new types of social engagement, encounter, and play. In 2016, SFMOMA commissioned Rincón Gallardo to create a new work titled The Formaldehyde Trip, which weaves together Mesoamerican cosmologies, feminist activism and theory, and indigenous women’s struggles for their territories.

Find out more about the people and stories that make up SFMOMA. We love what we do and want to share it with you!
See All