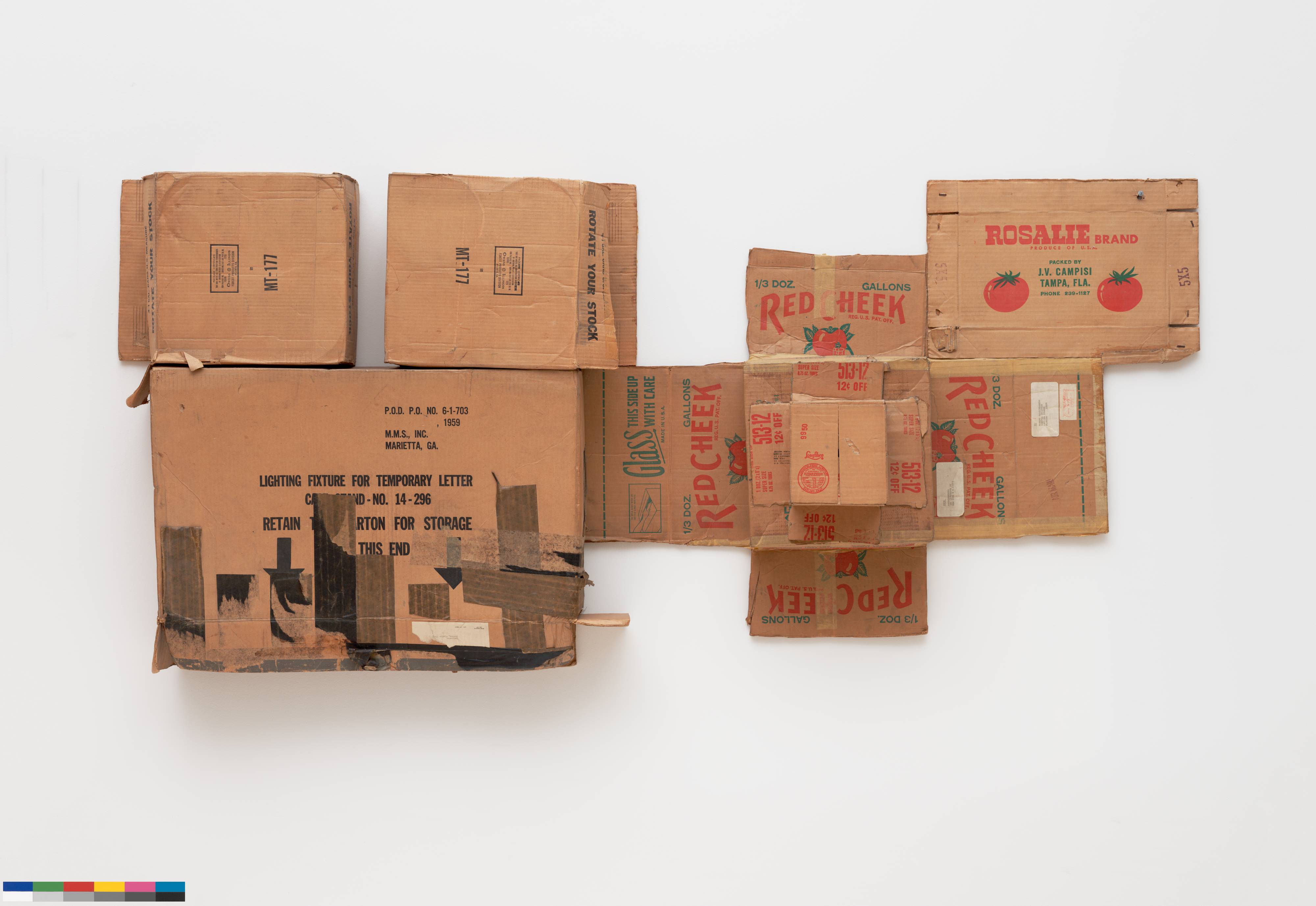 Rosalie/Red Cheek/Temporary Letter/Stock (Cardboard) (1971) is one of the earliest works in the Cardboards series (1971–72), the first body of work Rauschenberg began after moving from New York City to Captiva Island, Florida, in 1970. The Cardboards consist of thirty-six wall-mounted sculptures made from found cardboard boxes that the artist flattened, tore, and arranged in various configurations. Rosalie more explicitly embodies Rauschenberg’s New York-to-Florida transition than any other work in the series. The two mailing labels on the far right flap of the “Red Cheek” box reveal its role in the artist’s recent move: One label is addressed to Rauschenberg in the general delivery for Captiva Island; the other, a return label, bears the Lafayette Street address of his New York studio. Other brand names and messages indicating the boxes’ original contents—Red Cheek, Rotate Your Stock, and Lighting Fixture for Temporary Letter—are also visible. For Rosalie, as with the other Cardboards, Rauschenberg used these markings as the basis for the sculpture’s title.

Arranged on a rectilinear grid, Rosalie harkens back to the harmonious compositions and eclectic use of found materials first seen in the artist’s earliest mature works, such as Mother of God (ca. 1950), and developed to the fullest in the Combines, including Collection (1954/1955). In a brochure produced by Gemini G.E.L. in 1971, as he was working on the Cardboards and his related Cardbirds series (1971), Rauschenberg described cardboard as “a material of waste and softness. Something yielding.” As such, cardboard offered a radical departure from the sturdier materials such as metal, glass, and motors used in the technology-based works he had been producing in New York. Its use also departed from the earlier works’ celebration of popular everyday products, instead casting a questioning eye toward the refuse generated by the manufacture and transport of consumer goods. The boxes show the wear and tear one expects to find on used commercial containers, with scuffs, staples, and stains testifying to their previous status as disposable packaging. In an interview published in 1991, Rauschenberg explained: “When I lived in New York I was used to the richness and treasures you could find in the streets. When I moved to Florida obviously there was not that kind of material. I thought, okay . . . can’t be dependent on the surplus and refuse of an urban society. So, what material, no matter where I was in the world, would be available? Cardboard boxes!”

Rauschenberg’s Cardboards can also be understood more broadly as a response to art movements such as Postminimalism, Arte Povera, and Process art, to which he was exposed through his travels in Italy in the mid-1960s and his close association with the artists involved with the Leo Castelli Gallery, New York. Although the work created by the Castelli circle—a group that included figures such as Richard Serra (b. 1938), Bruce Nauman (b. 1941), and Robert Morris (b. 1931)—varied widely, all of those artists shared an interest in process, impermanence, variability, and the subversive potential of banal or industrial materials. In his performance works of the 1960s, Rauschenberg had explored related territory through unscripted durational events and the replacement of stylized choreography with everyday routine motions. With the Cardboards’ splayed, cast-off boxes, he infused his painting and sculpture practice with these same concerns.