Often described as the first postmodern artist, Robert Rauschenberg was a protean innovator whose work in painting, photography, sculpture, performance, and printmaking helped establish the ongoing concerns of contemporary art. SFMOMA’s extensive holdings of works by the artist serve as an anchor for the museum’s ongoing exploration of postwar art and are the subject of a special compendium of research, the Rauschenberg Research Project.

Born in Port Arthur, Texas, Rauschenberg served in the United States Navy from 1942 to 1945 before studying art, first at the Kansas City Art Institute in 1947–48, then briefly in Paris, at the Académie Julian, in the summer of 1948. That fall he enrolled at Black Mountain College in North Carolina in order to study with Josef Albers (1888–1976), the renowned Bauhaus teacher, designer, and painter. Rauschenberg moved to New York City in fall 1949 and enrolled at the Art Students League, where he took classes intermittently through 1952. During this period he took time to return to Black Mountain for several shorter terms of study. His experiences and the friendships he formed there deeply influenced the improvisational use of materials and collaborative strategies that would define his career. Two of Rauschenberg’s most significant collaborators were composer John Cage (1912–1992) and dancer and choreographer Merce Cunningham (1919–2009), who taught at Black Mountain in the summer of 1952. Following their time together at the school, the three men engaged in a robust artistic and intellectual cross-fertilization that would fuel Rauschenberg’s work well into the following decade.

In fall 1952, Rauschenberg spent six months traveling in Italy and North Africa with fellow artist Cy Twombly (1928–2011). Back in New York, immersed in the circle of artists known as the New York School and with Cage and Cunningham’s avant-garde influence as a foil, Rauschenberg explored many of the central ideas of Abstract Expressionism, both acknowledging and transgressing the movement’s emphasis on gesture, individualism, action, and direct expression through paint. A period of vigorous experimentation in 1953 culminated in two of his most controversial, now iconic works: Erased de Kooning Drawing and Automobile Tire Print (both 1953). His best known body of work, the Combines (1953–64), paired representational elements—such as magazine and newspaper clippings, fragments of clothing, and construction debris and other items gathered in the streets of New York—with compositional strategies explored by the Abstract Expressionists. Blurring the boundaries between painting, sculpture, and collage, these works earned Rauschenberg international acclaim by the mid-1960s.

Rauschenberg’s impulse to merge media and spheres of artistic activity propelled him into the realm of experimental dance and theater. He designed costumes, lighting, and sets for the Merce Cunningham Dance Company from 1954 to 1964, and in 1963 he began choreographing and performing in works of his own invention. His interest in collaborating with scientists and engineers led him to cofound Experiments in Art and Technology (E.A.T.), an organization that fostered such partnerships, in 1967. The 1960s also saw Rauschenberg becoming increasingly active politically, with particular emphasis on global humanitarian and environmental issues. At the end of the decade, he moved permanently to Captiva Island, Florida, prompting a radical change in his work as he turned temporarily to simple materials such as paper, cardboard, and pencil, partly in response to the spare resources of his new island home.

With his move to Captiva Island, Rauschenberg expanded his studio’s specialized capabilities and support system of assistants and technical collaborators, building an environment that fed his appetite for experimentation. Areas dedicated to lithography, metalworking, painting, silkscreening, and eventually, digital printing were built during the 1970s and 1980s, giving him free reign to pursue a vast range of media and processes. He continued to mix art materials and disciplines in provocative ways, with an increasingly global frame of reference. His intense engagement with cultural and social issues led him to organize the Rauschenberg Overseas Culture Interchange from 1984 to 1991, an unprecedented project that took him to countries such as Tibet, Cuba, and China and sought to create social connections and bridge political differences.

The staggering breadth and diversity of Rauschenberg’s oeuvre make it difficult to summarize. His work has been described variously as a precursor to Pop art, Minimalism, process art, Conceptualism, and performance, testifying to the revolutionary effects that his cross-disciplinary and iconoclastic approach had on the field of American art in the postwar period.

Robert Rauschenberg activates Trophy IV (for John Cage) during a 1999 interview at SFMOMA. 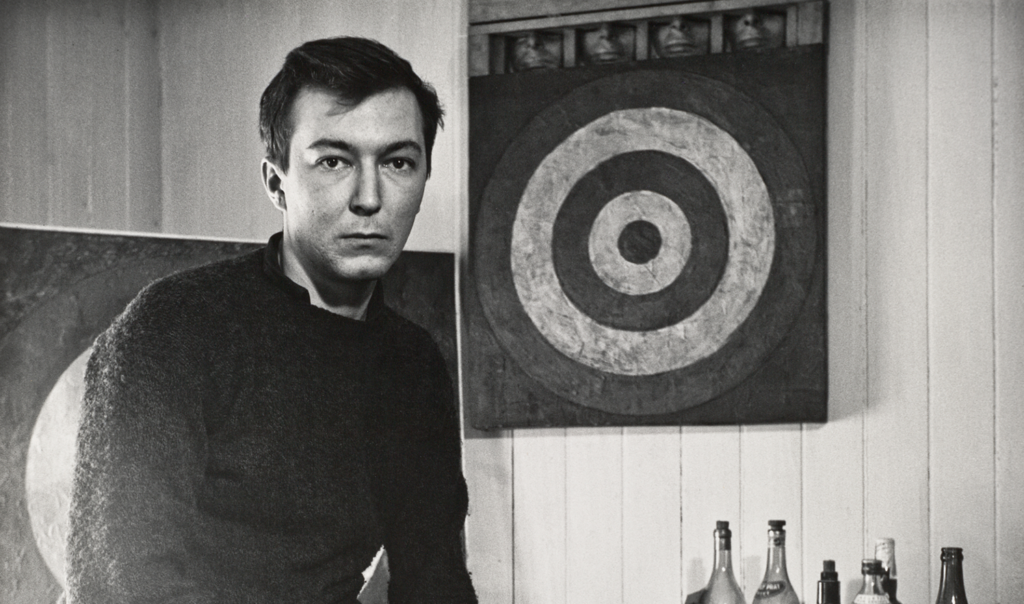 The Rauschenberg Research Project provides free worldwide access to a wealth of scholarly research and documentation related to artworks by Robert Rauschenberg in SFMOMA’s collection.