In 1965, Robert Rauschenberg created Sleep for Yvonne Rainer as a testament to his friendship and mutually inspiring collaborations with dancer and choreographer Yvonne Rainer (b. 1934). Although the story of Rauschenberg’s connection to the Merce Cunningham Dance Company is better known, his own performances of the 1960s were arguably more influenced by his work with the collective of dancers and artists known as Judson Dance Theater, and particularly with Rainer. Rauschenberg was introduced to the world of modern dance through Cunningham, and he designed costumes, sets, and lighting for Cunningham’s dance company between 1954 and 1964. But by the end of his tenure there he was also working closely with Rainer. He designed the lighting for the premiere of her Terrain (1963) and later performed in several of her compositions, including We Shall Run (¾) (1963) and Parts of Some Sextets (1964–65). Rainer’s focus on untrained dancers and mundane motions such as walking, crawling, and the ritualistic handling of everyday objects clearly resonates with Rauschenberg’s embrace of everyday materials and images in his artwork. Indeed, his performances and choreography with the Judson group from this period reflect the impulse he and Rainer shared to blur distinctions between dancers, audience, sets, and props.

Sleep for Yvonne Rainer is structured by a large panel to which various images silkscreened on paper have been attached. A repeating series of military transports, echoed in red, black, and blue, anchors the composition, while a single photograph of a crate of Sunkist oranges hovers mid-frame. These collaged elements—along with images of pillows and a detail from a Baroque relief—are sealed within a clear Plexiglas casing that acts as a support for the surprising array of three-dimensional objects suspended from the work’s surface, ranging from tin cans and a spent tube of paint to assorted empty plastic tubes and salvaged wooden chair rungs. Many of these items can be rotated or adjusted, suggesting a variability that finds it fullest expression in the three small panels—each containing smaller collages and similarly sealed in Plexiglas—that connect to the main panel by way of thin chains. The panels may be repositioned to hang from a series of hooks on the work’s surface or even mounted on surrounding walls within reach of the chains; both actions are encouraged by the artist in the inscription that appears on the reverse of the painting. Sleep for Yvonne Rainer’s potential for endless rearrangement within a set of predefined limits reflects a compositional approach that pays tribute to Rainer’s choreography and to the energizing effect her work had on Rauschenberg’s art.

Bruno Bischofberger sometime between 1974 and 1980

In addition to appearing in the special exhibitions listed above, Sleep for Yvonne Rainer was shown in SFMOMA’s galleries in 2016 as part of Pop, Minimal, and Figurative Art: The Fisher Collection, a rotating presentation of the Doris and Donald Fisher Collection at SFMOMA.

Verso: Upper right, titled and signed by the artist: “SLEEP FOR YVONNE RAINER RAUSCHENBERG 1965”; followed by inscription in the artist’s hand: (1 5’ x 7’ UNIT + 3 SMALL UNITS) SMALL UNITS MAY BE HUNG ON ANY HOOKS ON FACE OF LARGE UNIT OR ON THE WALL WITHIN REACH OF CHAIN. IN NO CASE SHOUD [sic] ANY PART BE DETACHED.”; center vertical support bar, “20” inscribed and encircled in white, with “60 x 84” below in black; upper horizontal support: “BOSTON” (left) and “x236” (right)

Credit
The Doris and Donald Fisher Collection at the San Francisco Museum of Modern Art
Copyright
© Robert Rauschenberg Foundation
Permanent URL
https://www.sfmoma.org/artwork/FC.695.A-D
Artwork Status
Not on view at this time.

Sleep for Yvonne Rainer is one of three related works from 1965 that connect to Robert Rauschenberg’s involvement with dance and performance, particularly in the context of Judson Dance Theater. Each celebrates a friend with whom the artist had developed a rich artistic exchange or collaboration in the early 1960s—in this instance the dancer and choreographer Yvonne Rainer (b. 1934)...

Views of the Artwork (5) 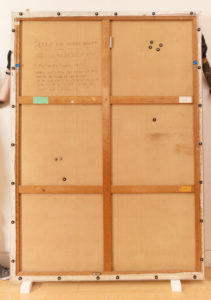 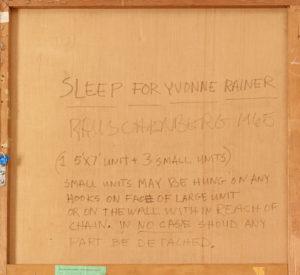 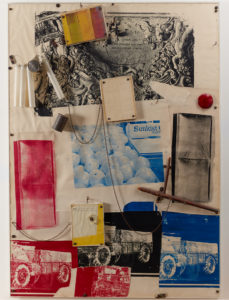 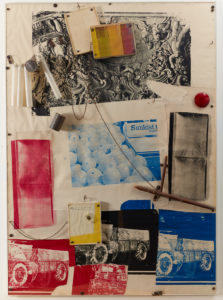 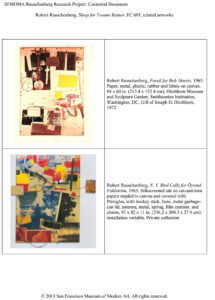 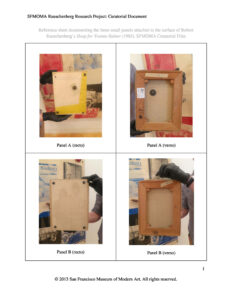 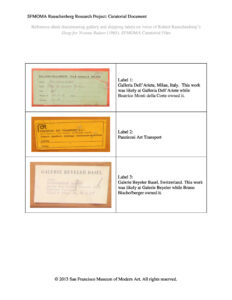 Labels on verso of Robert Rauschenberg's Sleep for Yvonne Rainer