Although found objects are a hallmark of Robert Rauschenberg’s work, this paper collage from 1973 disguises the found with the created. Paper bags and envelopes have lost their crisp forms, instead appearing like painted components in this deceptively simple work composed in shades of white, tan, and gold, with one vivid pop of red-orange. And while Rauschenberg frequently filled his art with bold color, he periodically wiped his palette clean to produce white or very muted, neutral bodies of work. Untitled (1973) was created at just such a moment in the artist’s career. After moving to Captiva Island, Florida, in 1970, Rauschenberg produced several series that incorporated everyday materials such as cardboard and paper.

Untitled (1973) is associated with the Egyptian Series (1973), a group of works that involved the use of a printing press to crush common paper products into thick, cream-colored sheets that were then used for drawing, gouache, and collage. Like many of the Egyptian Series works, Untitled (1973) was created by folding a partially worked sheet of paper in half lengthwise and running it through a press while some sections were still wet with paint and glue. This caused the paper layers to adhere to each other; when the sheet was unfolded, their separation created a mirror-image arrangement of skinned and embossed paper and flattened envelopes and bags to which Rauschenberg applied additional collage elements, drawn lines, and swipes of paint. The interaction of paint and paper in Untitled (1973) creates complex, trompe l’oeil effects: white paint mimics folded paper, and crumpled bags look like splotches of acrylic. The result is a sensitively wrought and considered composition that explores and extends the inherent qualities of and distinctions between paper, paint, and print.

Recto: Lower edge next to center fold, signed in pencil by the artist: “RAUSCHENBERG 73”

By Gary Garrels, July 2013
Part of the Rauschenberg Research Project

In the late fall of 1970 Robert Rauschenberg left New York City, his longtime base, and established his primary residence and studio on Captiva Island, Florida. This shift in location resulted in a marked change in his art, as he returned to a spare, reductive aesthetic not seen in his work since the early 1950s.

Views of the Artwork (4) 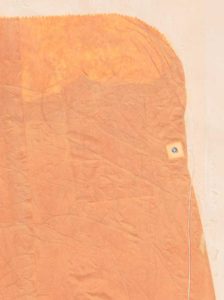 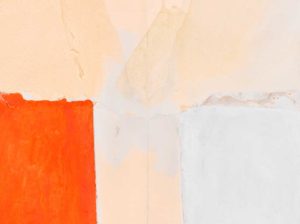 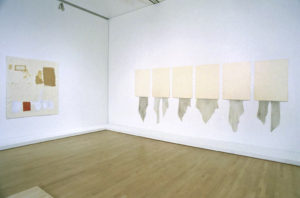