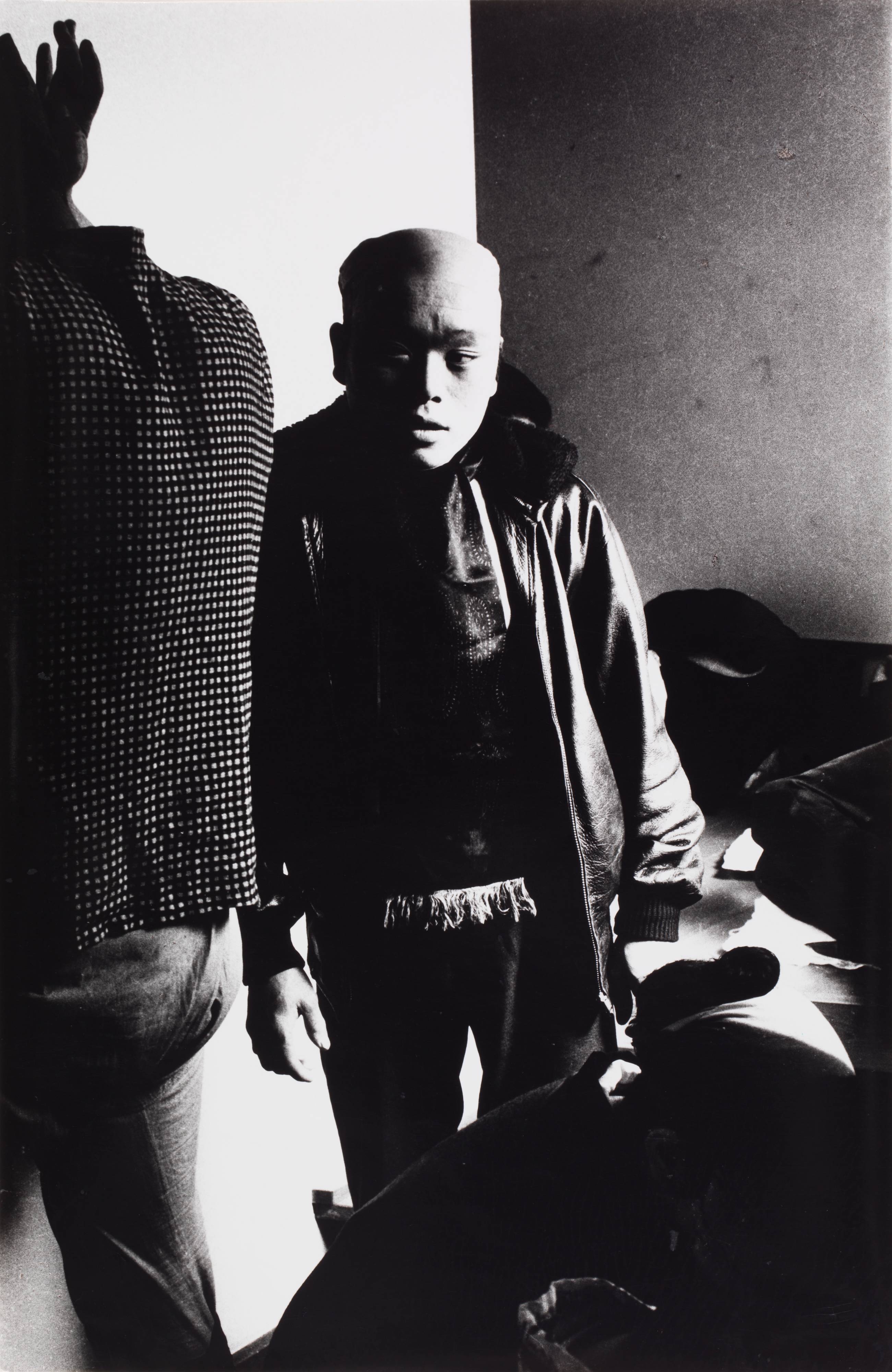 The actor has the face of an old man but the lithe body of a boy. His mysterious air is accentuated by the high-contrast printing that characterizes this period of Moriyama’s work; light seems to emanate from the white panel behind him, making his black leather jacket gleam. The light also isolates his face, made more remote by the tight-fitting skullcap stretched over his head and his sideways glance out of the picture frame. We can assume that he is a member of some underground theater troupe, rather than one of the more traditional players from the small, neighborhood stages of Kita-Senju in northern Tokyo. Moriyama photographed both types of actors around this time and included pictures of them in his first book, Japan: A Photo Theater (1968).

Like many of Moriyama’s subjects, this actor is at once a real person and a metaphorical figure. He belongs to both traditional, prewar, isolated Japan and the very ambiguous modernity of the 1960s, when the picture was made. The uncertainty of the era was an international phenomenon: the United States had erupted in violence—from the assassination of John F. Kennedy and conflicts stemming from the civil rights movement, to the Vietnam War and the student riots. Japanese citizens, in turn, experienced a lack of moral direction that was wrapped up in their country’s fraught political relationship with the United States. Japan had survived the furious ravaging of its cities and the tremendous loss of human life in World War II by retaining a close alliance with the Americans who had defeated them. By the 1960s the United States was trading heavily on this relationship, using Japanese bases to pursue the Vietnam War even though the Americans had forced Japan to revoke the right to wage wars of its own. Meanwhile, the Japanese were prospering through military contracts with the Americans and were rebuilding Japan with concrete housing and modern highways. The existential crisis articulated by the French philosopher Jean-Paul Sartre, which resonated in the work of Yukio Mishima and other Japanese contemporaries, also informs the strangely entrapped figure in Moriyama’s picture. The photographer’s closest friend at the time, Takuma Nakahira, was deeply engaged in French leftist politics and existentialist ideas, and in 1968 started the famous though short-lived magazine Provoke, in which Moriyama’s work appeared. Both Nakahira and Moriyama were committed to exploring the special language of photography, and for them the medium also expressed the disquiet, uncertainty, and darkness of this period in Japan.

For an enhanced viewing experience, it is recommended you use a desktop.

As Japan shifted to a consumer economy after World War II, its large newspaper companies began producing mass-market photography magazines. Such publications were important vehicles for circulating and supporting the new kind of photography that was emerging at the time—work that evinced a unique, indigenous, and highly expressive style, an often-unacknowledged art form unto itself. Principal among these magazines were the monthly Camera Mainichi, supported by Mainichi Shimbun (Daily News), and Asahi Camera, supported by the Asahi company (now Asahi Shimbun Shuppan). Camera Mainichi and Asahi Camera printed not only new and distinctive work by the generation of Japanese photographers then coming to maturity, notably Shomei Tomatsu, Daido Moriyama, and Eikoh Hosoe, but also pictures and critiques of pictures from Europe and the United States. Many pages were devoted to amateur work in the medium, with tips for taking better family photographs joining genuine criticism and discussions of major exhibitions and catalogues from overseas. There were also smaller, more personal magazines in circulation such as Miyako Ishiuchi and Asako Narahashi’s Main, which featured their work and experiences as experimental women photographers in Japan. This selection of articles and catalogue essays from the late 1950s through the 1980s exemplifies contemporary discourse about Japanese photography and its ties to the international photography community.