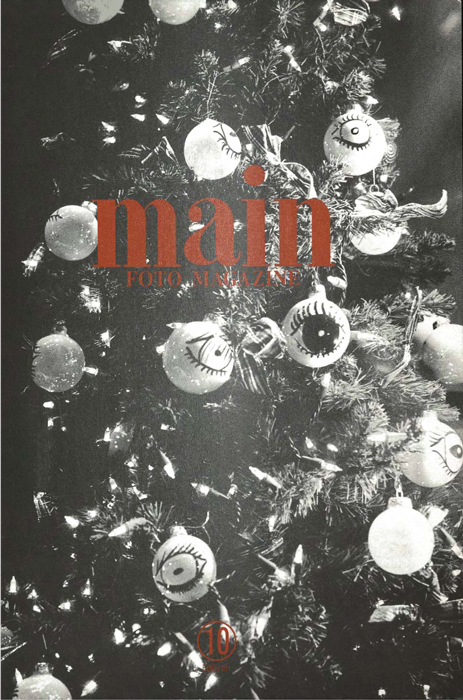 I went to New York right before the publication of this final issue of MAIN. I was invited to participate in a group exhibition that included me and two other Japanese photographers (Masao Yamamoto, Yukio Oyama) at a new art gallery that opened a year ago in Chelsea. The gallery was more spacious than I expected, and I really liked the setup. With its beautiful interior and pure white walls it gave the impression that this was not just a group show but three solo exhibitions happening in the same place, at the same time. But as at my exhibition in Italy last year, there was one thing that bothered me: the frames. I came to realize how difficult it is to get frames right when you’re abroad. The way that I understood the data I sent to the supplier and the way they understood it were completely different. When ordering remotely something as delicate as picture frames from someone you have never met before in person, you have to explain everything down to the tiniest detail. If you miss anything you might end up with something completely different from what you were asking for. Unlike in Italy, there was only one day left to get the framed pictures out and redo them. The frames they gave me were unlike anything I had ever envisioned. I was at a loss for what to do. I stared at them for a moment, thinking about what might be the best solution for this problem. If we were to put in a 150 percent effort, we might have been able to fix it at the last minute. But thinking again, I realized that maybe it wasn’t all that bad. I decided to acknowledge the framer’s efforts and regained my composure. After all, I had just arrived at the gallery straight from the airport.

Chelsea remains a somewhat desolate neighborhood of auto-repair shops and warehouses, but in the midst of this, art galleries multiply day by day. It’s even common to have entire buildings taken up by art galleries. While the exteriors are bleak, the insides of these buildings have high ceilings, and the walls are painted white, creating a simple and modernistic impression that stands in stark contrast to the cramped conditions of Tokyo’s recent constructions. The Sonnabend Gallery opened while I was in New York, so I had the opportunity to attend the reception with Kunié Sugiura. In terms of space, the Sonnabend Gallery is more an art museum than a gallery, with a massive photographic portrait of Fidel Castro towering right across the entrance. When I came to New York, Fox News was reporting day and night about the controversy surrounding Elián González—how he was rescued and later detained at gunpoint and so on—and I was wondering if that was a sensitive choice. Just when I was thinking how bizarre that photograph was, Sugiura remarked that this was the work of (Hiroshi) Sugimoto. It wasn’t a portrait at all. It was a photograph of a wax figure. Looking at first glance like the real thing, the image of the wax Castro evoked notions of the real and the fake, the true and the false. Its relationship to photographic representation was easy to see, but I had wished to see Sugimoto go in a different direction.

I stayed in a quiet room near the Chelsea Hotel, two minutes away from the gallery, which made me feel at home immediately. At the Comme des Garçons store nearby, with its futuristic, ultramodern interior, I let out a groan upon seeing the outrageous price of a wraparound skirt that could have easily been mistaken for a loincloth. Yet I admired their foresight in being among the first to move into that area. The rent in the area has tripled over the last two years, and I’ve heard that some galleries are already considering moving away again.

One of the purposes of my trip to New York was to meet John Coplans. I had already contacted him via mail from Japan, so I managed to arrange an appointment quickly. He lives on the Bowery. I had walked on that street a few times before. There is one block where all the stores with restaurant and kitchen equipment are concentrated. Once you have walked there, it is hard to forget the scenery of stainless-steel sinks out on display everywhere on the sidewalks. Then I came across a handwritten nameplate on a weathered door facing the street. I opened the door, curious as to what kind of studio Coplans might live in. The ceiling was unusually high, and the wooden stairs in the poorly lit hallway squeaked. I was surprised. I arrived in a room on the third floor that served as his studio and office. I expected to see a sofa or some other comfortable place to sit, but there was none. The chairs looked like they had been picked up off the streets, and things were left scattered all over the desk. In the corner of the room there was a cyclorama, a four-by-five-inch camera, tripods, and other equipment. I started feeling a bit tense, thinking that it was probably here where he shot his nude portraits. On a desk right in front of me were scattered prints from his new series on fingers. In a word, the place gave the impression of complete disorder.

Coplans told me he was feeling ill that morning and had taken a fair amount of medication, pointing to a pill case. “Would you like some gummies? They’re from Japan.” He handed me a bag of purple heart-shaped gummies. Then he began to complain about a review of his latest works in the New York Times—how he felt uneasy about the writer linking his work to ideas of agelessness, though he never intended to show the skin of the aged for its own sake. In fact, earlier this year the New York Times had featured a review of his recent exhibition that filled a whole page of the art section. The column touched on the topic of aging skin and also mentioned my work, 1906 to the Skin. “I can express everything I want to with my own body. For instance, look at this,” he said. He pointed at a photograph in his catalogue. It showed his torso curled up. “This represents a Japanese woman,” he said. I was like, “Seriously?” “Yes, and this shaggy hair indicates the back of an Ainu woman,” he replied. “Um, thinking about it . . . maybe you’re right.” “Come on, I’m just kidding,” he laughed.

My first encounter with Coplans’s photography was almost ten years ago. His works were wonderfully strange, in a manner hard to describe. Everything was about his own body. With skin and limbs, he created vistas of the body as one has never seen before. In these shapes we imagine animals, rocks, people, and who knows what, yet somewhere there is a self-irony, as if all the while he is laughing at himself. A middle-aged man? No, an elderly person shooting nudes of himself. This was an individual I definitely wanted to meet.

“I started my career in photography at the age of sixty, and now I’m already eighty,” he continued. “I have hearing aids, artificial teeth, failing eyesight, and I rely on Viagra for sex. . . . Slowly the senses and the body fall apart. Can’t feel anything during sex anymore, so I better let it be.” His incessant rambling left me perplexed. I didn’t know what to say. “I have an excellent assistant,” he said, introducing me to a young man. “I don’t have to worry about this or that, I just leave everything to him.”

“Do you want to see the darkroom?” he suddenly asked. I was delighted. These days, John Coplans is a world-renowned artist, a fixture of any major exhibition. I was lucky to get to see the darkroom of such a prominent photographer. The assistant I had met a moment ago had just finished doing a test print and let me come in. So, this is how it looks! It was a charmless room, like the inside of a warehouse, with a sink and two enlargers. Fairly simple and not too different from my own darkroom. He also uses rolled printing paper. A custom-made basin about 150 x 50 cm wide had pipes on each side with holes at regular intervals so that water could be released like a fountain. A straightforward setup. I had expected someone like John Coplans to work in a modern, functional, clean, and splendid darkroom, but on the contrary, it felt very artistic. I grew even fonder of him.

“I am old and can barely walk as far as three blocks away, so unfortunately I won’t be able to see your exhibition or come to Japan, but please let me know when you come to New York again,” he said when we parted.

Coincidentally, this was just when the Whitney Biennial was taking place, and I went to see Mr. Coplans’s works. Five photographs from his finger series were on view. When I looked at his picture frames, I realized they looked exactly like the ones I had. Perhaps they were from the same maker. I felt reassured I had decided not to change them. By the way, at this Biennial, a video by the Iranian female artist Shirin Neshat really stood out for me. It was not about art, culture, or everyday life in the Islamic world. Instead, her video painfully evoked fundamental twinges of emotion, sensation, joy, and despair that we thought we had left behind a long time ago. She is one of the emerging artists who seems to have been attracting attention recently.

Every day for two weeks I met with people, went to museums and galleries, and saw my own work at the show. I thought my Scars series was at the right place in New York. In the midst of the hustle and bustle of the big city, these scars appeared elegant, quiet, and at ease with everything.

Just when I was about to leave, a friend told me something. It had to do with scars, too. A couple was expecting their first child, and since the woman was not that young anymore, they asked a friend of theirs, a well-known doctor, to perform a C-section. The baby was delivered safely. But the doctor was so proud of his near-perfect procedure that he incised his initials with a scalpel next to the C-section scar on the mother’s abdomen. The couple took him to court. This made me remember how a while ago I took a photograph of a scar, and right below it there seemed to be the trace of another small injury. It looked like the doctor had signed their initials, I said as a joke. Now when I heard this story, it made me shudder.

There were so many things I wanted to write in the final issue of this journal, but an overall summary is just boring. I will defer my further problems and opinions to be expressed at a future occasion.