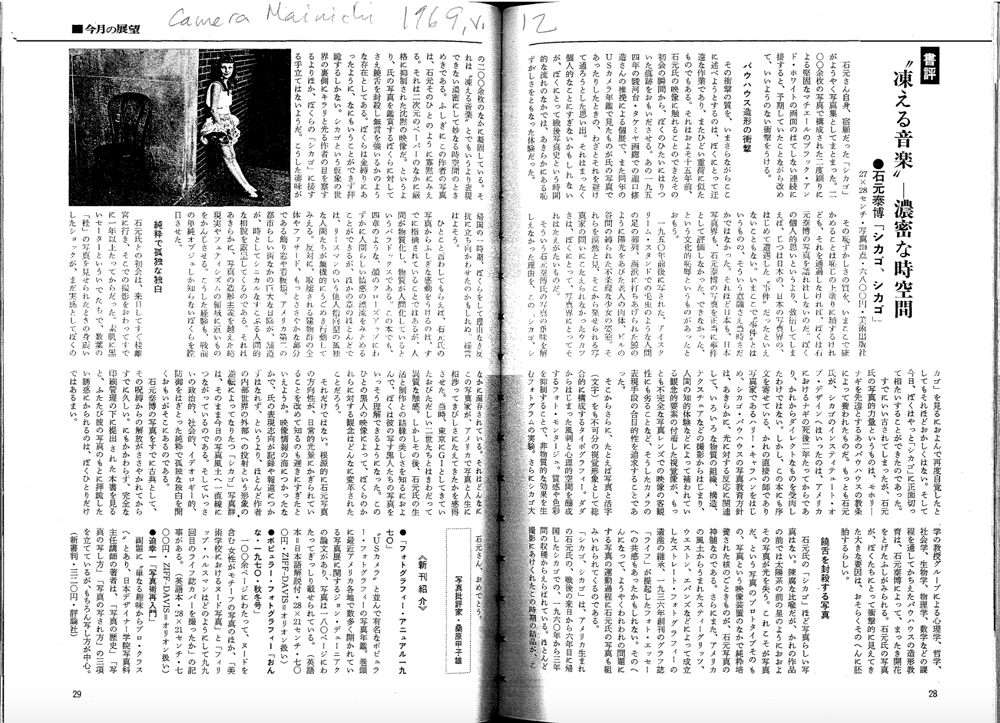 Ishimoto has finally achieved his long-cherished hope of publishing Chicago as a collection in book form. Made up of a seemingly boundless series of more than two hundred photographs—the crisp black-and-white, double-printed images that form his matière—this collection allows us to relive a nearly indescribable shock, even when one was expecting it.

The Shock of the Bauhaus

As I try to describe the nature of this shock, I find it to be an elusive, extremely weighty task. It reminds me of the indelible mark left on my forehead by my first encounter with Ishimoto’s pictures, around fifteen years ago. In 1954, with the backing of Shuzo Takiguchi, he held a solo exhibition at the Takemiya Gallery in Surugadai, and the following year I saw some of his pictures in the U.S. Camera Annual, but I remember I purposefully did my best to avoid them. Perhaps the problem was mine, but in the temporal flow of postwar photographic history, the experience clearly brought feelings of shame.

Trying to pin the nature of those feelings down now is akin to trying to whitewash that shame, but if I hadn’t passed through those feelings, I would not be able to talk about Yasuhiro Ishimoto’s photographs today. I’m not the only one—to explain, his showing was a first-of-its-kind “incident” in Japan and in Japanese photographic history. I say “incident,” though it isn’t clear whether people saw it that way at the time. Japan and the Japanese photography world probably did not think of his photographs that way. Perhaps we couldn’t—I believe there was a sort of cultural shame at work that prevented us from doing so.

Around 1950 Ishimoto took a number of pictures—a funereal procession of legs at an ice cream stand that looked like the legs of a caterpillar; the body of an old man that looked like a beached whale bathed in sunlight; an absurd figure of a young girl tied up in between buildings. As I and the rest of the photography world gazed haphazardly at these pictures, we had a hard time dealing with our own inability to respond to the questions the photographer raised through his work.

As I look at Chicago, Chicago now, it doesn’t surprise me at all that I hadn’t been able to grasp the gravitas of Yasuhiro Ishimoto’s photography, and I become aware of why. Today I am finally able to look at Chicago straight on and deal with it.

It has been said many times before, but Ishimoto developed his photographic abilities from the teachings of the Bauhaus, pioneered by [László] Moholy-Nagy. When Ishimoto entered the Institute of Design in Chicago, two years had elapsed since Moholy-Nagy had died in America, so Ishimoto didn’t study with him directly. However, the educational principles of the Chicago Bauhaus photographers, including Harry Callahan, who wrote the introduction to this book and who taught him directly, are clearly connected to his work. Starting with the response to light, the organization, the structure, the texture, and so on of various types of materials, Ishimoto seems to have sought the most deliberate applications of the expressive techniques available to him, always aware that the image he might aim for, though supplemented with human intellectual experience and conceptual faculties, would not achieve the objectivity of even the most imperfect photographic lens.

There is work that engages with typography, a visual form in which the photograph and the type (the written letters) are inseparable. There is the photomontage, which produces a sense of satire and psychological space—ideas that began with Dada. And there are experiments with photograms, which engender a nonobjective effect by suppressing texture and color. One can see that the formative Bauhaus education that Ishimoto absorbed while taking psychology, philosophy, sociology, biology, physics, and math classes with his Chicago professors eventually came to full bloom. The reason his work looks so shocking to us probably originates from that.

Photographs that Silence Us

No photographs are quite as “photograph-like” as those in Ishimoto’s Chicago. It is a hackneyed expression, but ordinary photographs pale in comparison to his pictures like stars lose their light before the sun. The prototypical photograph—the kind that makes you say, “This is a photo!”; the pure nucleus cultivated from the image-capturing mechanism of the camera—is at the essence of Ishimoto’s work. Perhaps he resonated with the photo essay as defined in the inaugural issue of Life magazine in 1936, which inherited the straight photography tradition of [Alfred] Steiglitz, [Edward] Weston, [Walker] Evans, and other photographers intimately interwoven with the American cultural fabric. Once we realize this, we can integrate Ishimoto’s work into our understanding of the development of the photography movements we’ve been thinking about so much.

Ishimoto was born in America and came to Japan after the war. He returned to Chicago six years later. The photographs in Chicago, Chicago were selected from the photos that he amassed there between 1960 and 1963. The fruits of Ishimoto’s labor, shooting photos day in and day out, crystalized into the two hundred works contained in this book. One might call them “frozen music”: the pictures pulsate with a mysterious, densely textured sense of time and space that is difficult to put into words. Strangely, his photographs seem to be as taciturn as Ishimoto himself. They are images of imposing silence, encased within the two dimensions of printing paper—or, to put it a different way, they are images that seem to enforce silence, to suppress all garrulousness even while we are attempting to appreciate them. We experience a temporary paralysis; we are unable to say anything, only able to admire the works in deep humility. It is as if there is no way for us to encounter Chicago other than by imagining what the photographer saw—the glimpses of light that shine out from behind the seemingly subjective world of Chicago itself. Perhaps it was this frightening quality that, for a period after his return to America, caused us to confront him with unfounded feelings of resistance. Let’s avoid saying the same foolish things again.

If I could just add one thing: It has already been said that Ishimoto’s photos move viewers in a strange way, but there is also a strange paradox—in these works, people become like material objects, and material objects are humanized. In this book, too, it is possible to detect a slight flow of human emotions in the close-ups of faces, such as those in the fourth section; however, in most of the other sections, lonely people are presented as [David] Reisman’s “other-directed” types—going about their business and moving in concert like inorganic matter. They stand in contrast to groups of demolished buildings and facades and even more modest details such as decorative shop windows and signs. At times the giant shadows and paved roads of America’s second-largest city reveal a cynical, exceedingly human countenance. One feels one is entering a realm of surreality that borders on fetishism, something far beyond the limitations of normal photographic creativity. To us who only knew the objet-centered approach of the prewar period, these works were eye-openers.

A Pure and Lonely Soliloquy

The first time I met Ishimoto in person was about one year after he had come to Japan and taken his pictures of the Katsura Imperial Villa. Even today I remember the shock that rocked my body when he, clad in a simple black sweater, showed me several photographs from Katsura. That experience made me realize how much difficulty he had endured in America making connections between his work and his life. He had an entirely different air about him than the many second-generation Japanese Americans who were in Tokyo as GIs at the time. However, once I learned about the connections between his life and his work, I came to understand the photographs that he had taken of black people much better. His photos of black people significantly transformed the ways that we thought about them.

That’s not all. One might say that we learned too late once again that fundamentally, Ishimoto’s photography tends toward scenes of daily life. In the sea of discussion about photography, it has been said that his mode of artistic expression keeps a nuanced distance from photos taken as records or for journalism. Yet the photographs collected in Chicago came into being though a kind of reversal of form—an almost complete projection of the photographer’s inner world onto the outside. In that way there is a direct line that connects his work to the climate of photography today. That is the reason that when one looks at his pictures, one feels like one is listening to a pure, lonely, unguarded soliloquy stripped of politics, social issues, and ideology.

A long time has passed since the words were whispered to liberate Yasuhiro Ishimoto’s photographs from the curse of becoming “classics.” That notwithstanding, I am certain that I am not the only one who feels the urge to bow down in deep admiration when looking at this superbly produced and printed book.