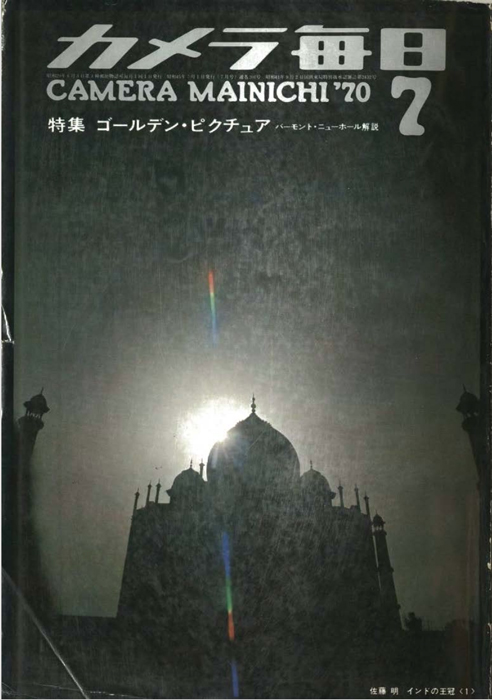 Eastman Kodak’s Golden Picture Pavilion is hosting a photography exhibition called [Photography Is a] Universal Eye at the site of Expo ’70. Thirty-three pieces by twenty-eight people [sic] from around the world have been chosen. Each piece is isolated in a black space but thrown into high relief by a controlled spotlight that serves as a hidden source of illumination.

The Universal Eye exhibition guides the eyes of visitors, especially those of serious lovers of photography, naturally from one work to another. Before they realize it, they are introduced not just to each individual work but to the collective effect of the entire exhibition. Insofar as that is the case, one can say that this exhibition gives viewers a deeply fascinating visual experience.

“An imaginative and daring exhibit technique infuses the work of twenty-six selected international photographers with even greater depth and feeling in the Photography Is a Universal Eye exhibit at Eastman Kodak Company’s Golden Picture Pavilion at Expo ’70 near Osaka, Japan.

Each photograph has been isolated in black space, with each precisely framed by direct beams of controlled light from concealed sources.

The Universal Eye exhibition provides an intense visual experience. The visitor—especially the serious photographer—is led subtly from one picture to another so that he becomes personally involved not only in the individual photographs but also in the cumulative effect of the exhibit.

This definitive statement of photography as a fine art has been achieved with only thirty-one photographs. Perhaps no other major exhibition has distilled this essence of the art with so few pictures.

The result has been achieved by pairing the works to form compositions of reinforcement, complement, and contrast. There are but two exceptions: Diane Arbus, whose work is normally brutal and direct, is represented by a more relaxed photograph, Identical Twins, which will stand alone and provide its own contrast, while a group of four pictures, Frank Eugene’s Adam and Eve and Edward Weston’s Nude, Pepper No. 30, and Two Shells, will illustrate the exhibit theme, ‘Counterpoint.’

This theme affords the greatest possible variety in subject matter, photographic technique, and levels of interpretation. At the same time, it imposes on the collection a necessary discipline of approach and a natural coherence.

Despite this, the exhibit does not propose any message beyond a presentation of environment—both human and natural—as seen through the eyes of the photographers.

The juxtaposition of Eugene’s and Weston’s work to express the exhibit theme is significant for its portrayal of the continuing evolution of photography as an art form. Eugene, the oldest photographer represented, reflects the influence of painting—particularly [James McNeill] Whistler’s painting—in his 1900 Adam and Eve. Weston’s Nude, in contrast, shows photography’s own growth in the delineation of texture and form. Similarly, Weston’s Pepper No. 30 and Two Shells dramatize his efforts to realize ‘depth of understanding, uniqueness of viewpoint, and vitality of presentation’ that enable the viewer to respond and participate in the original experience. Yet, the two photographs are related only because of their visual form.

Constant reinforcement of the counterpoint theme is obtained in the pairings of such photographs as Goro Ike’s Gaze and Mario Giacomelli’s Scanno. The somber, brooding visage in Ike’s picture contrasts sharply with the bright-faced boy who symbolizes hope amid the sorrow of four mourning women in Giacometti’s study of the search for a sense of life.

And life, certainly, is central to Harry Callahan’s Eleanor, a nude woman seen in distant silhouette against a square of white, and Ken Josephson’s Season’s Greetings, an infant wrapped in white and photographed against the photographer’s shadow. The idea of woman and the product of love is emphasized by the white surround in both pictures.

As in all art, photography also demands intellectual as well as emotional involvement as in the pairing of Bill Brandt’s Nude and Edward Steichen’s Pear on a Plate. In these discoveries of form, emphasized by the slight distortion resulting from the use of a wide-angle lens, the viewer immerses himself in the stark black and whites to penetrate the immediately apparent and to seek out the reality.

The same is true for the aerial view, Shell Parking Lot, London, taken by an anonymous photographer, and Rene Burri’s Shadow of a Tree. In the immediately glimpsed similarity of form, it is easy for the viewer to read into the photographs something that is not there.

More subtle in their emphasis on the fact that things may not be what they seem are Minor White’s Steely the Barb of Infinity and John Brook’s untitled photograph. White’s striking picture seems to be surf boiling and pounding on a rocky shore but, in reality, is a photograph of frost on a windowpane. Brook’s photograph resembles galactic clouds taken through a telescope but on closer study becomes a woman and trees in sunlight.

The work of man as opposed to the work of nature is seen in the radiating forms of Alvin Langdon Coburn’s The Octopus, New York and Walter Wunderlin’s Raindrop. Coburn’s view of freshly shoveled paths radiating from a pool in a snow-covered New York park and the veins of a leaf sweeping out from under a raindrop in Wunderlin’s picture are complementary effects that reinforce the idea of art imitating nature.

Complementary effects are also achieved in the placement of Eliot Porter’s Turn in Flight with Edward Weston’s Fungus. The flaring wings and individual flight feathers of Porter’s bird are matched in grace and design by the flaring cap and ribbed underside of Weston’s lowly fungus.

One of the most powerful contrasts in the entire show is that between Ansel Adams’s Mt. Williamson, Clearing Storm and Berenice Abbott’s New York at Night. The strength of the boulder-strewn foreground and the sunlight breaking through the clouds over the shouldering mountain in Adams’s photograph contrasts wilderness with the man-made ordered planes and blocks of New York’s giant buildings, emphasized by scattered lighted windows.

These two photographs, in turn, emphasize the differences between men at work and men at play as seen in W. Eugene Smith’s Pittsburgh Steel Worker and Jacques-Henri Lartigue’s Maurice Lartigue, Chateau de Rouzat. The intensity of the grimy, goggled steelworker as he peers into a furnace and the relaxed appearance of the nattily clad Lartigue in an inflated device for moving about on water have an almost painful impact in their social differences.

Another social commentary is expressed in Anna Chojnacka’s Cult of the Boyd and Ansel Adams’s Museum Storeroom. The grossness of the bodies of bathers in the Chojnacka photograph contrasts sharply with the trim musculature of the Greek statues in the museum storeroom, although the continuing concern with the body across centuries is readily apparent.

Yet the inviolate nature of human dignity comes through in two portraits by Dorothea Lange, Mexican-American and Adele Raas. The wide-eyed Mexican American child radiates anticipation, life, and hope, while the calm eyes in the worn face of Adele Raas speak of fulfillment and acceptance of years past.

Much the same feeling comes from the boy in Richard Avedon’s Sicily and the framed portrait of the man in Eugene Edward Richards’s Chiaroscuro.

A final emphasis on form is presented in the pairing of André Kertész’s Brick Built Walls and Yoshio Watanabe’s Room #2. The straight lines of Kertész’s walls, windows, and doors are stark and powerful, yet the muted, almost [Piet] Mondrian-like box effect of Watanabe’s Room #2 could represent the view of the same building inside.”[1]